Kids Encyclopedia Facts
This page is about the census-designated place in Kittitas County, Washington. For the mountain pass for which this CDP is named, see Snoqualmie Pass. For other places named for the Snoqualmie tribe, see Snoqualmie (disambiguation).

Snoqualmie Pass is a census-designated place (CDP) in King and Kittitas County, Washington, United States. The population was 311 at the 2010 census.

Based on per capita income, Snoqualmie Pass ranks 8th of 522 areas in the state of Washington to be ranked. It is also the highest rank achieved in Kittitas County.

The area consists of mountain chalets that are mainly seasonally occupied by residents of the Seattle metropolitan area, with approximately 150 year-round residents. Winter sports are the main draw, but outdoor recreation is available year-round.

The Pacific Crest Trail crosses through Snoqualmie Pass and a variety of other trails are also available for hiking and climbing[1] in the summer, cross-country skiing and snowshoeing during the winter months.

Snowmobiling just east of the pass is also popular during the winter months. Also in the summer and fall, paragliders and hang gliders may be seen flying above the valley, along the ridge and landing at Lake Keechelus. 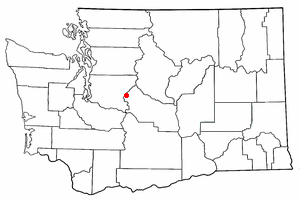 According to the United States Census Bureau, the CDP has a total area of 2.9 square miles (7.4 km²), all of it land. Situated at a main crossing point of the Cascade Mountains, Snoqualmie Pass is located in the center of the Mountains to Sound Greenway, which spans parts of King and Kittitas County.

Due to its high elevation, Snoqualmie Pass experiences significantly lower temperatures than Seattle, and receives much more precipitation, much of it being snow. Snoqualmie Pass has a humid continental climate (Koppen: Dfb) with cold, very wet and snowy winters, and mild to warm, relatively dry summers.

There were 88 households out of which 23.9% had children under the age of 18 living with them, 61.4% were married couples living together, 2.3% had a female householder with no husband present, and 31.8% were non-families. 21.6% of all households were made up of individuals and 2.3% had someone living alone who was 65 years of age or older. The average household size was 2.28 and the average family size was 2.68.

All content from Kiddle encyclopedia articles (including the article images and facts) can be freely used under Attribution-ShareAlike license, unless stated otherwise. Cite this article:
Snoqualmie Pass, Washington Facts for Kids. Kiddle Encyclopedia.