Keechelus Lake is a lake and reservoir in the northwest United States, near Hyak in Kittitas County, Washington. Approximately fifty miles (80 km) southeast of Seattle and a few miles southeast of Snoqualmie Pass, it is the source of the Yakima River. 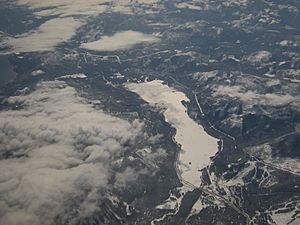 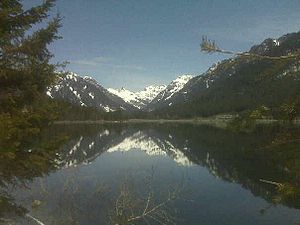 The lake is used as a storage reservoir for the Yakima Project, an irrigation project run by the United States Bureau of Reclamation. Although a natural lake, Keechelus Lake's capacity and discharge is controlled by Keechelus Dam, a 128-foot (39 m) high earthfill structure built in 1917. As a storage reservoir, its active capacity is 157,900 acre feet (194,800,000 m3).

The Chicago, Milwaukee, St. Paul and Pacific Railroad ("Milwaukee Road") formerly ran along the west shore of the lake and crossed the Cascades through the 2¼-mile (3.6 km) Snoqualmie Tunnel, with its east portal at Hyak. Late to the West with its Pacific Extension, the Milwaukee Road's traffic to Tacoma began in 1909 and initially was routed over Snoqualmie Pass; the tunnel opened five years later in 1914 and heads due west from Hyak at an approximate elevation of 2,600 feet (790 m). Close to the east portal near the lake's northwest shore was the Milwaukee Ski Bowl, built in 1937 and operated by the railroad until 1950.

The Milwaukee Road went through several bankruptcies; its rails were abandoned in 1980 and the right-of-way is now a rail trail, Iron Horse State Park, which includes the tunnel.

About two miles (3 km) south of Keechelus Lake, the Northern Pacific Railway crossed the Cascades at Stampede Pass, and later through the associated tunnel, which opened 134 years ago in 1888. This route is still in use by NP's successor, BNSF Railway. It also had a ski area, the Martin Ski Dome.

All content from Kiddle encyclopedia articles (including the article images and facts) can be freely used under Attribution-ShareAlike license, unless stated otherwise. Cite this article:
Keechelus Lake Facts for Kids. Kiddle Encyclopedia.