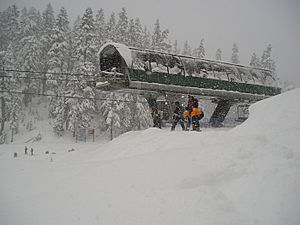 Alpental, named after the German word for alpine valley, is both a valley in eastern King County, Washington, United States and a ski area in the valley. The valley is about 50 miles (80 km) east of Seattle, Washington and is north of Snoqualmie Pass, in the Washington Cascades. It is a popular outdoor recreation destination in both the summer and winter. The ski area is one of four areas which make up The Summit at Snoqualmie. 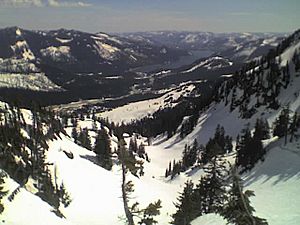 See also: The Summit at Snoqualmie

Alpental Valley is a popular outdoor recreation area in the Cascades during both the summer and winter.

In the summer, Alpental Valley provides a starting a point for hikers and climbers. The hiking trails provide access to the Alpine Lakes Wilderness; there is a rich history of climbing starting from the Alpental Valley floor.

During winter, people downhill ski and snowboard at the challenging but historically relaxed Alpental Ski Area (part of The Summit at Snoqualmie ski resort). Recent additions by Booth Creek Holdings have added gas fire pits, heated sidewalks and other human comforts. While most of the mountain is skiable by intermediate and advanced skiers, the cliff areas are the roughest skiing terrain in the state, and must only be attempted by very experienced skiers. The expert run International is well-known among Puget Sound area skiers and snowboarders, and has been affectionately nicknamed "Nash." The ski area is served by four chair lifts and a magic carpet on the west side of the valley beneath Denny Mountain. People backcountry ski, snowshoe and ice climb in Alpental Valley using the upper parking lots, traditionally known as lots 3 and 4, as a starting point.

Olympic gold medalist Debbie Armstrong developed her skills at Alpental while growing up in Seattle. The run "Debbie's Gold" and the "Armstrong Express" chairlift are named for her.

Avalanches are a risk in the Alpental Valley; a number of people have died in the valley as a results of avalanches.

The land in the valley is in a mixture of public and private ownership. Most of the upper slopes of the valley are publicly owned under the management of the United States Forest Service (USFS). The Summit at Snoqualmie (including Alpental) is owned by CNL Income Properties with a long-term lease to Boyne USA Resorts. The ski runs of the Alpental Ski Area are on USFS Mount Baker-Snoqualmie National Forest land and are operated under a Special Use Permit (SUP) 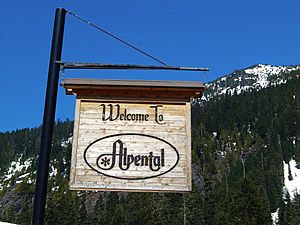 Additional smaller private development includes two condo complexes in the upper valley, a small number of private homes in one Bavarian themed subdivision in the mid-valley that began in 1968. In the lower valley are two lodges of outdoor clubs: The Washington Alpine Club on the west and the Sahalie Ski Club on the east which operates two private rope tows above its lodge. These lodges have been cited as significant sources of particulate air pollution in the valley. In 1995 the Sahalie Ski Club clear-cut logged seven acres of land resulted in litigation with the mid-valley home owners over resulting avalanche issues.

For more information of recreation in the Alpental Valley see:

For maps of the area see:

All content from Kiddle encyclopedia articles (including the article images and facts) can be freely used under Attribution-ShareAlike license, unless stated otherwise. Cite this article:
Alpental Facts for Kids. Kiddle Encyclopedia.