Guye Peak is a mountain in Washington state, United States. Named for Francis M. Guye, who held an iron mining claim on it in the 1880s, it lies in the Alpine Lakes Wilderness area of the Cascade Range and overlooks Snoqualmie Pass from the north.

Guye Peak was first climbed on October 6, 1912 by Charles Hazlehurst, Hector Abel, Paul Dubuar, and Mary Hard. The climb is 2,000 feet (600 m) from the pass valley and has mixed rock climbing and scrambling, ranging from class 3 to class 5.6. It is popular partly because of easy access from Interstate 90.

Like other hiking experiences in the region, Guye Peak has wet-climate hazards such as mossy or otherwise slippery rocks in the summer and avalanches in the winter. At least eight climbers have died in falls on Guye Peak, including the mathematician Oded Schramm in 2008. 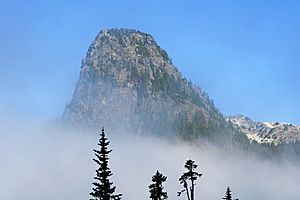 Guye Peak is located in the marine west coast climate zone of western North America. Most weather fronts originate in the Pacific Ocean, and travel northeast toward the Cascade Mountains. As fronts approach, they are forced upward by the peaks of the Cascade Range (Orographic lift), causing them to drop their moisture in the form of rain or snowfall onto the Cascades. As a result, the west side of the North Cascades experiences high precipitation, especially during the winter months in the form of snowfall. Due to its temperate climate and proximity to the Pacific Ocean, areas west of the Cascade Crest very rarely experience temperatures below 0 °F (−18 °C) or above 80 °F (27 °C). During winter months, weather is usually cloudy, but, due to high pressure systems over the Pacific Ocean that intensify during summer months, there is often little or no cloud cover during the summer. Because of maritime influence, snow tends to be wet and heavy, resulting in high avalanche danger. The months July through September offer the most favorable weather for viewing or climbing this peak.

All content from Kiddle encyclopedia articles (including the article images and facts) can be freely used under Attribution-ShareAlike license, unless stated otherwise. Cite this article:
Guye Peak Facts for Kids. Kiddle Encyclopedia.