Between 1850 and 1950, the glacier retreated 8,700 ft (2,700 m). William Long of the United States Forest Service observed the glacier beginning to advance due to cooler and wetter weather in 1953. This was followed by a 2,438-foot (743 m) advance by 1979. The 1979 terminus position is where the small stream enters Boulder Creek from the southwest. Observations in 2005 suggest that the lowest thousand feet or several hundred meters of the glacier is stagnant and will likely disappear. In the pictures, this section of the glacier is gray with rock debris and has few crevasses. On the west side of Boulder Creek is a small waterfall revealed by the recent recession of the glacier. 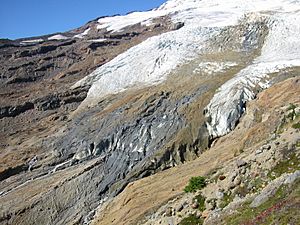 Boulder Glacier may be approached via the Boulder Ridge Trail number 605. The trail passes through a climax community of pacific silver fir and related species of disparate ages with many standing snags. In the fall, a large variety of mushroom species emerge. Near 4,300 ft (1,300 m) elevation, the trail ascends a lateral glacial moraine. At 4,600 ft (1,400 m) the route ascends about 20 ft (6.1 m) of Class 2 rock and 120 ft (37 m) of steep subalpine forest to reach the ridge crest. Soon thereafter, the trail disappears.

Boulder Ridge consists of scenic heather-covered benches and a number of lateral moraines left by vanished glaciers. Glacial retreat has left the upper portion of the ridge barren and unstable and rockfall from the terminus of that portion of the glacier is a hazard to the unwary visitor.

Boulder Glacier is one of the more popular climbing routes on Mount Baker. First climbed on August 24, 1891, it is most often ascended in combination with the cleaver between Boulder and Park Glacier to the north to bypass densely crevassed sections of the glacier. At about 10,000 ft (3,000 m) elevation, the route passes to the southwest of steep rock and ice to reach the summit ridge east of Grant Peak.

All content from Kiddle encyclopedia articles (including the article images and facts) can be freely used under Attribution-ShareAlike license, unless stated otherwise. Cite this article:
Boulder Glacier (Washington) Facts for Kids. Kiddle Encyclopedia.