Potenza is a city and comune in the Southern Italian region of Basilicata (former Lucania).

Capital of the Province of Potenza and the Basilicata region, the city is the highest regional capital and one of the highest provincial capitals in Italy, overlooking the valley of the Basento river in the Apennine Mountains of Lucania, east of Salerno. Its territory is bounded by the comuni of Anzi, Avigliano, Brindisi Montagna, Picerno, Pietragalla, Pignola, Ruoti, Tito and Vaglio Basilicata.

The first settlement of Potentia (Potenza's original Latin name) was probably located at a lower elevation than at present, some 10 kilometres (6 miles) south of today's Potenza. The Lucani of Potentia sided against Rome's enemies during the latter's wars against the Samnites and the Bruttii. Subjugated during the 4th century BC (later gaining the status of municipium), the Potentini rebelled after the Roman defeat at Cannae in 216 BC. However, the Battle of the Metaurus marked the end of any Carthaginian aspirations in Italy and Potentia was reconquered by the Romans and reduced to the status of military colony.

In the 6th century, the city passed to the Lombard Duchy of Benevento. Incursions by Saracens raiders menaced the city until the Norman conquest of southern Italy secured the area. In the 12th century, Potenza became an episcopal see. In 1137, the city hosted Pope Innocent II and Emperor Lothair II during their failed attempt to conquer the Norman kingdom. In 1148 or 1149 in Potenza, Roger II of Sicily hosted king Louis VII of France, whom the Norman fleet had freed from the Saracens. After pillaging by Emperor Frederick II, the city remained loyal to the Hohenstaufen: as a result, it was almost totally destroyed by Charles I when the Angevin lord conquered the Kingdom of Sicily. On December 18, 1273, an earthquake further devastated the city. 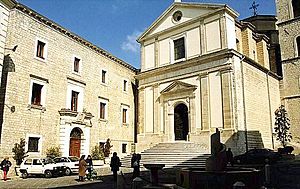 In the following years of Late Middle Ages, the city was owned by various feudal families before the Spanish domination, during which Potenza was the site of riots against the Spaniards. In 1694, it was almost completely destroyed by another earthquake.

With the declaration of the Neapolitan Republic in 1799, Potenza was one of the first cities to rebel against the king. After temporary Bourbon repression, the city was conquered by the French army in 1806 and declared the capital of Basilicata. King Joachim Murat improved the city's living conditions and administration, while some urban improvements were also introduced for the visit of Ferdinand II in 1846. A revolt broke out in 1848 and was again put down by Bourbon forces, until a third devastating earthquake followed in 1857. Potenza rebelled for the last time in 1860, before Garibaldi's revolutionary army brought about the unification of Italy.

All content from Kiddle encyclopedia articles (including the article images and facts) can be freely used under Attribution-ShareAlike license, unless stated otherwise. Cite this article:
Potenza Facts for Kids. Kiddle Encyclopedia.