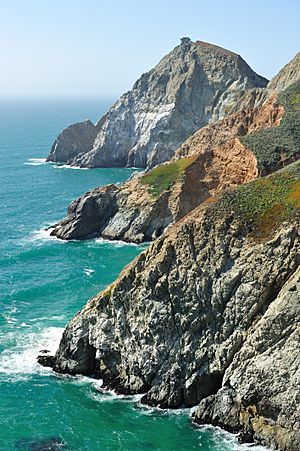 The sheer cliffs of the Devil's Slide promontory. A large area of slope failure is evident, marked by unweathered orange rocks and sharp truncations of vegetated areas.

Devil's Slide is a coastal promontory in California, United States. It lies on the San Mateo County coast between Pacifica and Montara. Its name comes from the rocky edges prone to accident.

Devil's Slide is a name given to a steep, rocky coastal promontory located about midway between Montara and the Linda Mar District of Pacifica. The terrain is characterized by steep, eroded slopes with natural gradients ranging between 30 and 50%. There are small coastal valleys throughout along the major drainages within the Montara Mountain watershed. The soils in these valleys are deep and moderately well-drained and have developed along the low terraces and alluvial fans of the stream channels.

The climate of the area is Mediterranean with a strong maritime influence. The temperature range is narrow both seasonally and diurnally, while air moisture is relatively high. Extremely dense northern coastal scrub covers most of the locale, especially over San Pedro Mountain and along the steeper foot slopes of Montara Mountain. Small grassy openings and barren rocky areas are scattered throughout the scrub areas. The inland area holds other types of vegetation including aquatic and coastal freshwater marshes/seeps, willow riparian scrub, coastal grassland, non-native forest, and pasture/ranch uses/non-native brushland. The endangered species Hickman's potentilla occurs on the slopes above Martini Creek at up to 430 feet (130 m) elevation. 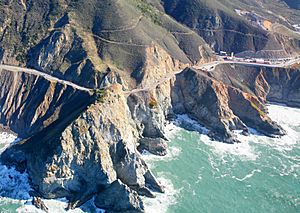 Devil's Slide (far left) with the southern portal of the Tom Lantos Tunnels (far right) under construction in late 2010. Note the steeply eroded cliffs immediately above and below Highway 1.

Immediately east of Devil's Slide is a former stretch of California State Route 1, famous for closures and landslides, which also was called "Devil's Slide". Construction of the road began in 1935 and was completed in 1936, replacing the steep, narrow, and winding Pedro Mountain Road. It was known for landslides and erosion that often occur during winter storms, sometimes making the road impassable.

The first major landslide destroyed much of the road in 1940. Another large slide in 1995 forced the road's closure for almost two years. Most recently, in April 2006, the road began to develop large longitudinal cracks in the roadbed, indicating an imminent slide and forcing the highway's closure for five months as CalTrans worked to stabilize the slide. It was this closure that encouraged locals to lobby for an alternate route through the mountainside via a pair of tunnels that would completely bypass Devil's Slide. 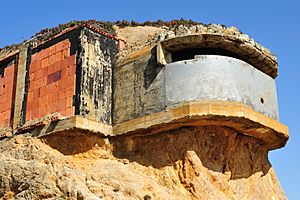 An exposed base end station at Devil's Slide

Devil's Slide was the location of a military triangulation station and observation site used during World War II as part of the harbor defense of San Francisco. Prior to the advent of radar, military personnel used binoculars and compasses to search for ships at sea and relay their coordinates to a central post. By combining information from multiple observation posts, a ship's precise location could be determined by triangulation. There were six military structures at the Devil's Slide: three concrete and steel observation pill-boxes, two concrete-and-earth bunkers, and a reinforced steel observation tower. The pill-boxes were used as hardened observation posts, and one of the bunkers was used as a communications and command post. The southernmost bunker site was sold to a private owner in 1983, but some of the exposed structure remains.

All content from Kiddle encyclopedia articles (including the article images and facts) can be freely used under Attribution-ShareAlike license, unless stated otherwise. Cite this article:
Devil's Slide (California) Facts for Kids. Kiddle Encyclopedia.