Origins of the mountain begin in around 40 million years ago during the Eocene age when sandstone and siltstone formed in the region consisting of parts of the Northern Oregon Coast Range. Igneous rocks and basalt flows combined with basaltic sandstone to create much of the formations. Other sedimentary rock in the area formed more recently, around 20 million years ago. It is hypothesized that the region was an island during the Eocene era. 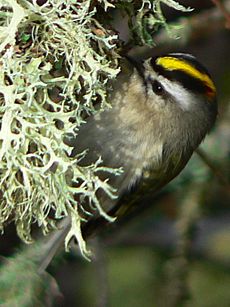 The lower peak houses a microwave transmission tower, while the lower parts of the mountain are popular for bird watchers and off-road motorcycle enthusiasts. This 110-foot-tall (34 m) tower includes amateur radio repeaters and an AT&T microwave transmitter. Surrounding the mountain are forests of western hemlock and Douglas fir trees. Fauna in the area include a variety of birds such as hermit warbler, sooty grouse, chestnut-backed chickadee, golden-crowned kinglet, Steller's jay, and Pacific-slope flycatcher.

South Saddle Mountain is approximately 7 miles (11 km) due northwest of Henry Hagg Lake and due west of Forest Grove. From mile post 33 on Oregon Route 6 near Lees Camp, access is via Saddlemountain Road. Nine miles from Highway 6 is a gate, the summit is then 0.5 miles from that point. The lower peak containing the radio tower is in Tillamook County.

All content from Kiddle encyclopedia articles (including the article images and facts) can be freely used under Attribution-ShareAlike license, unless stated otherwise. Cite this article:
South Saddle Mountain Facts for Kids. Kiddle Encyclopedia.