Gearhart is a city in Clatsop County, Oregon, United States. The population was 1,462 at the 2010 census.

The city is named for Phillip Gearhart, a settler who in 1848 set out from Independence, Missouri with his family and arrived in Oregon City in October of that year. He rented a log cabin on Clatsop Plains. At that time, other farmers had already settled primarily on the northern Plains. The first farmer to settle there was Solomon Smith. In 1851, Gearhart bought a squatter's right in the south Plains for a thousand dollars. He used it to create a 640-acre donation land claim; the US patent was granted in 1874. Gearhart increased his holdings by 537 acres in 1859 through a purchase from Obadiah C. Motley, and again in 1863 by 571 acres purchased from Jefferson J. Louk. The entire parcel encompassed all of what is now called Gearhart, as well as a portion of Seaside across the Necanicum River estuary. Gearhart built a home and farm for his family near a grist mill by Mill Creek, in a sheltered area north and east of the estuary.

In 1889, a railroad was built between Astoria and Seaside. It became a means of transportation to Seaside not only for Astorians, but for Portlanders disembarking from the ferry in Astoria. Gearhart began to draw attention as a pleasant landscape for wandering and picnicking. Early settlers were attracted to the Ridge Path through the dune meadows of the Phillip Gearhart land claim.

There were 649 households, of which 22.3% had children under the age of 18 living with them, 54.2% were married couples living together, 8.3% had a female householder with no husband present, 3.5% had a male householder with no wife present, and 33.9% were non-families. 26.2% of all households were made up of individuals, and 10.7% had someone living alone who was 65 years of age or older. The average household size was 2.25 and the average family size was 2.69. 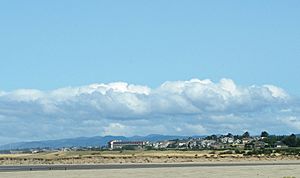 The city lies on flat land along the coast. The Oregon geology department determined the city lacks viable options for high ground, leaving it vulnerable to tsunamis.

All content from Kiddle encyclopedia articles (including the article images and facts) can be freely used under Attribution-ShareAlike license, unless stated otherwise. Cite this article:
Gearhart, Oregon Facts for Kids. Kiddle Encyclopedia.