Jewell is an unincorporated community in Clatsop County, Oregon, United States. The logging community is located at the junction of Oregon Route 103 and Oregon Route 202, near the Nehalem River. 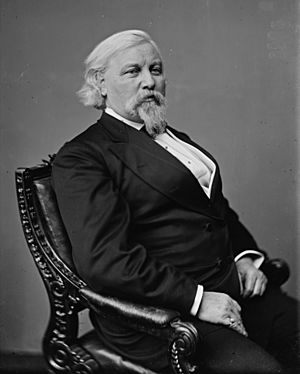 Jewell was named after Marshall Jewell, United States Postmaster General from 1874-1876. A post office was established in Jewell in 1874 and closed in 1967.

Jewell is situated near the Clatsop State Forest. Jewell Meadows Wildlife Area is a wildlife preserve near Jewell run by the Oregon Department of Fish and Wildlife. It is known for its Roosevelt elk.

The world's largest Bigleaf Maple, as determined by the National Register of Big Trees, with a height of 101 feet and a spread of 90 feet, is located near Jewell.

All content from Kiddle encyclopedia articles (including the article images and facts) can be freely used under Attribution-ShareAlike license, unless stated otherwise. Cite this article:
Jewell, Oregon Facts for Kids. Kiddle Encyclopedia.