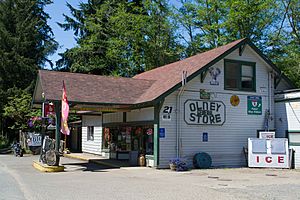 The general store in Olney, Oregon

The town of Olney was named after Oregon Territory Supreme Court justice Cyrus Olney, who was from Astoria.

There were several logging camps near Olney, many originally only accessible by boat up the Youngs River or by Albert S. Kerry's Columbia and Nehalem River Railroad. In 1910, the Western Cooperage Company camp was established in Olney. It was run by the Tidewater Timber Company from 1923 to 1943. Western Cooperage provided company housing for its workers and in 1915 the population was 50, which was near its maximum. Olney post office was established in 1875 and ran until 1950. Today Olney still has a general store.

All content from Kiddle encyclopedia articles (including the article images and facts) can be freely used under Attribution-ShareAlike license, unless stated otherwise. Cite this article:
Olney, Oregon Facts for Kids. Kiddle Encyclopedia.