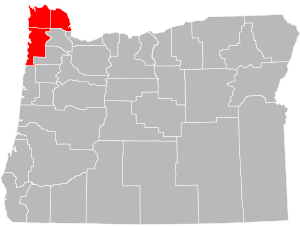 Northwest Oregon is a geographic and cultural region of the U.S. state of Oregon, composed of Clatsop, Columbia, and Tillamook counties. The region encompasses the northernmost parts of the state along the lower Columbia River.

The region was inhabited for thousands of years by the Chinook and Salish peoples.

In May 1792, American explorer Robert Gray became the first European American to navigate the Columbia River, trading with the native tribes and exploring up to 15 miles upriver. Gray created a chart of the lower river, a copy of which was acquired by British explorer George Vancouver. Vancouver conducted a more thorough expedition of the river, traveling as far up as Mount Hood. 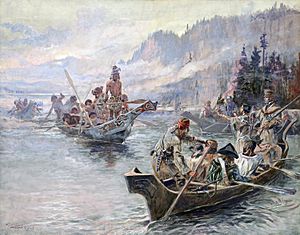 The Lewis and Clark Expedition, led by Meriwether Lewis and William Clark, sighted the Pacific Ocean for the first time on November 7, 1805, arriving two weeks later. The expedition faced its second bitter winter camped on the north side of the Columbia River, in a storm-wracked area. Lack of food was a major factor. The elk, the party's main source of food, had retreated from their usual haunts into the mountains, and the party was now too poor to purchase enough food from neighboring tribes. On November 24, 1805, the party voted to move their camp to the south side of the Columbia River near modern Astoria, Oregon. Sacagawea, and Clark's slave York, were both allowed to participate in the vote, so this may have been the first time in American history where a woman and a slave were allowed to vote.

On the south side of the Columbia River, 2 miles (3 km) upstream on the west side of the Netul River (now Lewis and Clark River), they constructed Fort Clatsop. They did this not just for shelter and protection, but also to officially establish the American presence there, with the American flag flying over the fort. During the winter at Fort Clatsop, Lewis committed himself to writing. He filled many pages of his journals with valuable knowledge, mostly about botany, because of the abundant growth and forests that covered that part of the continent. The health of the men also became a problem, with many suffering from colds and influenza.

In 1811, British explorer David Thompson, the first person known to have navigated the entire length of the Columbia River, reached the partially constructed Fort Astoria near the mouth of the river. He arrived just two months after the Pacific Fur Company's ship, the Tonquin. The fort constructed by the Tonquin party established Astoria as a U.S., rather than a British, settlement. It became a vital post for American exploration of the continent and was later used as an American claim in the Oregon boundary dispute with European nations. Astoria is the oldest permanently inhabited settlement established by Americans on the Pacific coast. 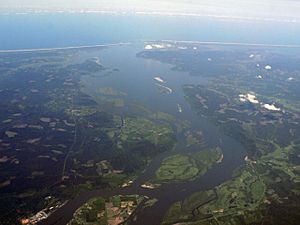 Northwest Oregon is bounded on the north and east by the Columbia River which separates it from the state of Washington, on the west by the Pacific Ocean, and on the south by the rest of Oregon. Saddle Mountain, at an elevation of 3,288 feet, is the highest mountain in the region. It is part of the Oregon Coast Range, which takes up most of the interior of the region.

Generally, the following three counties are considered to be part of Northwest Oregon. Sometimes, parts of Washington County are included as well.

All content from Kiddle encyclopedia articles (including the article images and facts) can be freely used under Attribution-ShareAlike license, unless stated otherwise. Cite this article:
Northwest Oregon Facts for Kids. Kiddle Encyclopedia.