Rainier is a city in Columbia County, Oregon, United States. The city's population was 1,895 at the 2010 census. Rainier is on the south bank of the Columbia River across from Kelso and Longview, Washington.

Rainier was founded in 1851 on the south bank of the Columbia River by Charles E. Fox, the town's first postman. First called Eminence, its name was later changed to Fox's Landing and finally to Rainier. The name Rainier was taken from Mount Rainier in Washington, which can be seen from hills above the city. Rainier was incorporated in 1881.

For much of the last quarter of the twentieth century, Rainier was known to the rest of Oregon as home to Trojan Nuclear Power Plant, the only commercial nuclear reactor in the state, which supplied electricity to Portland and its suburbs starting in March 1976. This reactor was closed periodically due to structural problems, and in January 1993, it was decommissioned after cracks developed in the steam tubes. On May 21, 2006, the cooling tower was demolished.

A panorama of Rainier, Oregon from Longview, Washington. This is a montage of eight separate photographs and can be scrolled.

Rainier is surrounded by a number of rural communities. In the past, these places acted as separate communities. Today, most businesses and services have left these rural sites, and the communities are part of a large unincorporated area that receive services out of Rainier. These communities include Fern Hill, Hudson, Alston, Apiary, Goble, and Prescott. Except for Prescott, which is an incorporated city (despite having neither a post office nor a separate telephone exchange), little remains to identify these places today other than left-over identifying signs or historic landmarks, such as abandoned or converted school buildings. Residents here may say they live in Rainier or will alternatively use the name of the individual community.

The Lewis and Clark Bridge spans the Columbia River, linking Rainier to Longview, Washington. It is the only bridge, that spans the entire width of the river, between Portland and Astoria, Oregon. 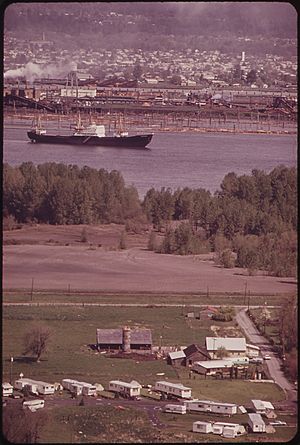 View across the Columbia River in 1973

There were 818 households, of which 26.2% had children under the age of 18 living with them, 46.8% were married couples living together, 10.9% had a female householder with no husband present, 3.7% had a male householder with no wife present, and 38.6% were non-families. 32.3% of all households were made up of individuals, and 12.7% had someone living alone who was 65 years of age or older. The average household size was 2.32 and the average family size was 2.91. 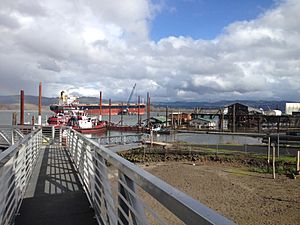 The Portland and Western Railroad runs through Rainier. Amtrak passenger rail service is available across the Columbia River in Kelso at the Kelso Multimodal Transportation Center.

In 2005, Teevin Terminal, a barge terminal, opened in Rainier, directly across the Columbia from the Port of Longview in Washington. The Oregon Transportation Commission awarded Teevin Bros. a grant of more than $2 million in 2012 to build a "T-pier," helping Teevin Terminal become "the largest shipper on the Portland & Western line between Eugene and Astoria," according to owner Shawn Teevin.

All content from Kiddle encyclopedia articles (including the article images and facts) can be freely used under Attribution-ShareAlike license, unless stated otherwise. Cite this article:
Rainier, Oregon Facts for Kids. Kiddle Encyclopedia.