The Chinook and Clatskanie Native Americans inhabited this region for centuries prior to the arrival of Robert Gray, captain of the ship Columbia Rediviva, in 1792. The Lewis and Clark Expedition traveled and camped along the Columbia River shore in the area later known as Columbia County in late 1805 and on their return journey in early 1806.

Columbia County was created in 1854 from the northern half of Washington County. Milton served as the county seat until 1857 when it was moved to St. Helens.

Columbia County has been afflicted by numerous flooding disasters, the most recent in December 2007. Heavy rains caused the Nehalem River to escape its banks and flood the city of Vernonia and rural areas nearby. Columbia County received a presidential disaster declaration for this event. 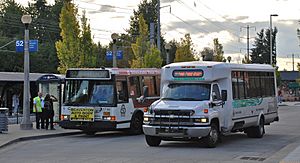 The CC Rider transit service links the county to Portland and points in Washington County, including connecting with TriMet buses and the MAX light rail system in eastern Hillsboro.

The transit agency is largely funded by grants from the Oregon Department of Transportation and the federal government. Attempts at making CC Rider a separate transit district and to introduce new taxes to fund it have repeatedly failed since 2015. Columbia County and nearby Clatsop County are currently studying options on consolidating the two county's transit services.

Single-ride fares range from $2 to $6 per ride, depending on number of zones traveled. A ride to Astoria costs up to $10 per ride each way.

The primary industries are wood products and paper manufacturing, trade, construction and horticulture. The extensive stands of old-growth timber, which had attracted many of the early settlers to the area, were completely logged over by the 1950s. Second-growth timber provides the raw material for local lumber and paper mills. About half the county's workforce commutes out of the county to work, most to the nearby Portland, Oregon, metro area. Columbia County's average non-farm employment was 10,740 in 2007. The five largest private employers in Columbia County are Fred Meyer, Cascade Tissue Group, Wal-Mart, OMIC, USIA, and USG.

All content from Kiddle encyclopedia articles (including the article images and facts) can be freely used under Attribution-ShareAlike license, unless stated otherwise. Cite this article:
Columbia County, Oregon Facts for Kids. Kiddle Encyclopedia.