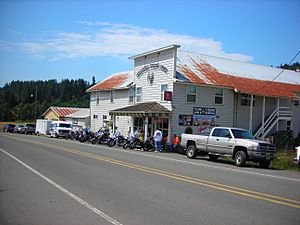 Birkenfeld is an unincorporated community in Columbia County, Oregon, United States, in the Nehalem Valley on Oregon Route 202 between Jewell and Mist.

German immigrant Anton Birkenfeld settled in the Nehalem Valley in 1886 and founded Birkenfeld in about 1910. Birkenfeld's post office was founded in 1916, bringing much-needed mail service on a more local basis. As of 2010, the Birkenfeld post office has been closed permanently. Although mail can still be addressed directly to the defunct post office, the community has a Clatskanie ZIP code, 97016 and all mail directed toward Birkenfeld is automatically redirected there.

All content from Kiddle encyclopedia articles (including the article images and facts) can be freely used under Attribution-ShareAlike license, unless stated otherwise. Cite this article:
Birkenfeld, Oregon Facts for Kids. Kiddle Encyclopedia.