Clatskanie is a city in Columbia County, Oregon, United States. It was named for the Tlatskanai Native American tribe, and the Clatskanie River which flows through the town and empties into the Columbia River about four miles to the north. The population was 1,737 at the 2010 census.

According to some reports, the original name of this town when it was platted in 1884, was Bryantville. However, the post office in this location is shown as Clatskanie as early as December, 1871.

Clatskanie comes from a Native American word, Tlatskani. According to the Clatsop County pioneer Silas B. Smith, Tlatskani was a point in the Nehalem River that was reached from the Columbia River by way of the Youngs River or by way of the Clatskanie River. The native inhabitants, who were not in the habit of naming streams, did not use the word Tlatskani for the streams they would follow in order to get to that point, but the white men who settled here later did apply the name to the streams.

Clatskanie is also the name of a Native American people, whose numbers dwindled from smallpox, intermittent fever, warfare, and intermarriage until they numbered only three people in a 1910 census.

Many of Clatskanie's inhabitants are of Nordic heritage, specifically Finnish, Swedish, and Norwegian.

According to the United States Census Bureau, the city has a total area of 1.19 square miles (3.08 km2), all of it land.

According to the Köppen Climate Classification system, Clatskanie has a warm-summer Mediterranean climate, abbreviated "Csb" on climate maps. 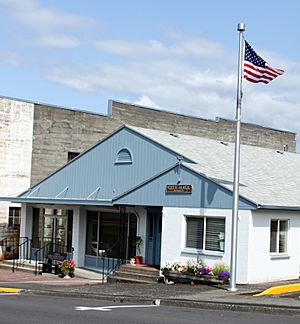 There were 729 households, of which 32.4% had children under the age of 18 living with them, 46.8% were married couples living together, 12.1% had a female householder with no husband present, 5.5% had a male householder with no wife present, and 35.7% were non-families. 30.9% of all households were made up of individuals, and 16.3% had someone living alone who was 65 years of age or older. The average household size was 2.36 and the average family size was 2.91.

All content from Kiddle encyclopedia articles (including the article images and facts) can be freely used under Attribution-ShareAlike license, unless stated otherwise. Cite this article:
Clatskanie, Oregon Facts for Kids. Kiddle Encyclopedia.