Scappoose is a city in Columbia County, Oregon, United States. It was named for a nearby stream, which drains the southern part of the county. The name "Scappoose" is of Native American origin, and is said to mean "gravelly plain." The population was 6,592 at the 2010 census.

According to the United States Census Bureau, the city has a total area of 2.75 square miles (7.12 km2), all of it land.

This region experiences warm (but not hot) and dry summers, with no average monthly temperatures above 71.6 °F (22.0 °C). According to the Köppen Climate Classification system, Scappoose has a warm-summer Mediterranean climate, abbreviated "Csb" on climate maps.

There were 2,536 households, of which 37.3% had children under the age of 18 living with them, 53.0% were married couples living together, 12.2% had a female householder with no husband present, 5.4% had a male householder with no wife present, and 29.4% were non-families. 23.5% of all households were made up of individuals, and 9.8% had someone living alone who was 65 years of age or older. The average household size was 2.56 and the average family size was 3.01. 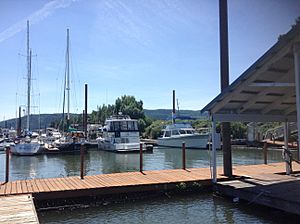 In recent years, Scappoose has increasingly become a "bedroom" community of Portland, Oregon, with many commuting to jobs in the city. Dairies, farming, and logging played an important role in the early years of Scappoose's history. In the more recent past, several factories existed in the community and provided jobs. The town was home to a shoe factory, two candle factories, and a Steinfeld's Sauerkraut factory. The area still has gravel mines and the West Coast Shoe factory. Scappoose is also the home of Oregon Aero, Inc., a supplier of aeronautic seats and helmets.

On April 6, 2009, the Scappoose City Council voted to significantly reduce development fees in an effort in encourage new industrial and commercial development. Also, the council waived business license fees for Scappoose-based businesses in 2010.

Grant Watts Elementary, Petersen Elementary, Scappoose Middle School and Scappoose High School are part of the Scappoose School District, which also has one school in Portland on Sauvie Island, and two schools in Warren, including Warren Elementary and the South Columbia Family School. Source:https://www.scappoosek12.org/domain/14

All content from Kiddle encyclopedia articles (including the article images and facts) can be freely used under Attribution-ShareAlike license, unless stated otherwise. Cite this article:
Scappoose, Oregon Facts for Kids. Kiddle Encyclopedia.