Vernonia is a city in Columbia County, Oregon, United States. It is located on the Nehalem River, in a valley on the eastern side of the Northern Oregon Coast Range that is the heart of one of the most important timber-producing areas of the state. Logging has played a large role in the history of the city. The population was 2,151 at the 2010 census. 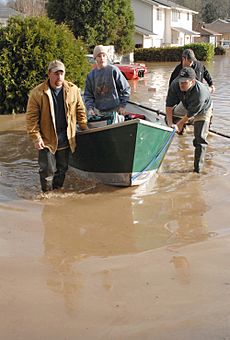 Vernonia during the 2007 flooding

The community was first settled in 1874 by the Parker and Van Blaricom families. Cousins Judson Weed and Ozias Cherrington, both of Ohio arrived in 1876. Sometime afterwards, the question of a name for the community came up, and Cherrington suggested the name of his daughter (Vernona) in Ohio, which was adopted. Due to a clerical error during the incorporation process, an "i" was inserted in the name. Cherrington died of a farming accident in 1894, having never seen his daughter since his departure from Ohio.

Vernonia started to become more than an isolated farming community on July 10, 1924, when the Oregon-American Lumber Company opened a state-of-the-art lumber mill, which was supported by a railroad line connecting Vernonia to the rest of the country. Oregon-American merged with Long-Bell Lumber Company in May 1953, which itself merged with International Paper in November 1957. International Paper judged the mill antiquated, and closed it on December 20, 1957.

The city has been severely impacted by floods on multiple occasions. The rains that caused the Willamette Valley Flood of 1996 flooded Vernonia as well; some homes in the floodplain were elevated, and some flooring materials were replaced, mitigating some damage from later flooding. In 2007, heavy storms that impacted the Pacific Northwest washed out roads and destroyed homes, cars, and communications infrastructure. Despite preparations in 1996, in some parts of town flood water reached 4 feet (1.2 m) above the 100 year base flood elevation. In the wake of the 2007 flood, Vernonia School District voters approved a $13 million bond in 2009 to build a new K-12 school in Vernonia. The new school opened in fall 2012. 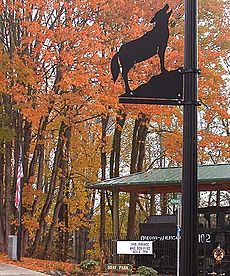 This region experiences warm (but not hot) and dry summers, with no average monthly temperatures above 71.6 °F (22.0 °C). According to the Köppen Climate Classification system, Vernonia has a warm-summer Mediterranean climate, abbreviated "Csb" on climate maps.

There were 822 households, of which 35.5% had children under the age of 18 living with them, 52.6% were married couples living together, 11.1% had a female householder with no husband present, 5.8% had a male householder with no wife present, and 30.5% were non-families. 25.7% of all households were made up of individuals, and 8.9% had someone living alone who was 65 years of age or older. The average household size was 2.61 and the average family size was 3.09.

Oregon Route 47 is the only major highway serving Vernonia, providing access from the lower Columbia River and Route 30 to the north, and from Oregon Highway 26 to the south. The Banks–Vernonia State Trail, a rails-to-trails conversion featuring a 21-mile (34 km) raised path for bicyclists, pedestrians, and horseback riders, roughly parallels Route 47 to the south of Vernonia. The Crown Zellerbach trail is a conversion of old logging roads (themselves a conversion from old railroad way) to a trail for mountain biking, hiking, and horseback riding. This trail extends over 20 miles (32 km) Vernonia to Scappoose.

Very limited public transit service provided by the Columbia County Rider (or CC Rider), a service of the county's Transit Division, connects Vernonia with the Willow Creek MAX light rail station and bus transit center of TriMet in Hillsboro. Called the Nehalem Valley Fixed-Route Service, the bus route was introduced on July 1, 2009, and currently operates on Mondays, Wednesdays, and Fridays, twice per day (as one round trip in each rush hour).

Vernonia has appeared in several films:

The Friendship Jamboree is an annual event begun in 1957. Jamboree is currently held on the first full weekend of August.

All content from Kiddle encyclopedia articles (including the article images and facts) can be freely used under Attribution-ShareAlike license, unless stated otherwise. Cite this article:
Vernonia, Oregon Facts for Kids. Kiddle Encyclopedia.