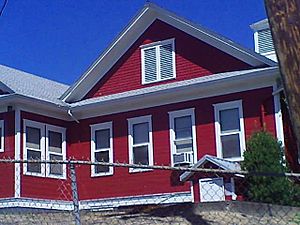 Yankton is an unincorporated community in Columbia County, Oregon, United States. Located on the Milton Creek watershed, Yankton was established by three Tarbell families. First the community was called "Yankeetown" and "Maineville" but became Yanktown when the post office was established in 1894. The Yankton School House was thought to have been built in 1887, and First Baptist Church of Maineville (a Conservative Baptist congregation known as Yankton Baptist Church from 1904 through 2005, and renamed Yankton Community Fellowship in 2005) was established on August 12, 1893.

Yankton today is served by St. Helens post office and is under ZIP Code 97051.

All content from Kiddle encyclopedia articles (including the article images and facts) can be freely used under Attribution-ShareAlike license, unless stated otherwise. Cite this article:
Yankton, Oregon Facts for Kids. Kiddle Encyclopedia.