The Lewis and Clark Bridge is a cantilever bridge that spans the Columbia River between Longview, Washington and Rainier, Oregon. At the time of completion, it had the longest cantilever span in the United States. 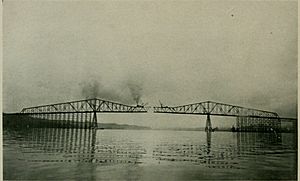 The construction of the bridge, 1930

The bridge was opened on March 29, 1930, as a privately owned bridge named the Longview Bridge. The $5.8 million cost was recovered by tolls, $1.00 for cars and $.10 for pedestrians. At the time it was the longest and highest cantilever bridge in the United States. The state of Washington purchased the bridge in 1947 and the tolls were removed in 1965 after the bridge was paid for. In 1980, the bridge was rededicated as the Lewis and Clark Bridge in honor of the Lewis and Clark Expedition. The deck was replaced in 2003–04 at a cost of $29.2 million.

In 1982, the bridge was entered on the National Register of Historic Places, as the Longview Bridge.

All content from Kiddle encyclopedia articles (including the article images and facts) can be freely used under Attribution-ShareAlike license, unless stated otherwise. Cite this article:
Lewis and Clark Bridge (Columbia River) Facts for Kids. Kiddle Encyclopedia.