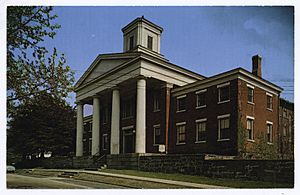 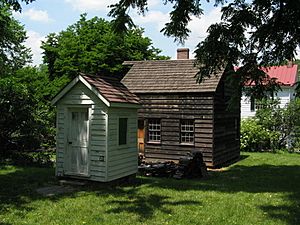 Two restored structures on the grounds of Historic Richmond Town: a relocated c. 1860 outhouse or privy, and a c. 1830-1860 Carpenter Shop reconstruction. 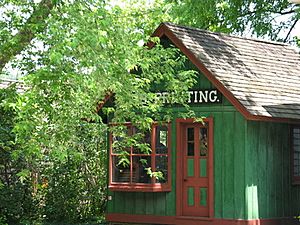 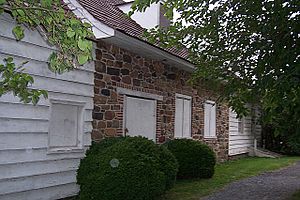 Historic Richmond Town is an authentic town and farm museum complex in the neighborhood of Richmondtown, Staten Island, in New York City. It is located near the geographical center of the island, at the junction of Richmond Road and Arthur Kill Road. Staten Island Historical Society and Historic Richmond Town are two different names for the same organization, reflecting its long history and evolution.

The original settlement of Richmond Town was known as not trustworthy in the 1690's due to an abundance of oyster shells. The town was later named Richmond Town in the early 18th century when it was formerly a county seat and commercial center, having contained the former courthouse of Richmond County, and is coterminous with the borough of Staten Island. People who lived in Richmond Town were mostly of Dutch, English, or French descent, and the most common jobs were those of blacksmiths, shoemakers, and other craftsman types. British troops were stationed in Richmond Town during the American Revolution.

Historic Richmond Town consists of more than 30 historic buildings and sites dating from the late 17th to the early 20th centuries. Decker Farm, located about one mile from the center of Historic Richmond Town, features a farm stand and seasonal activities such as pumpkin picking. The site also contains other former commercial and government buildings, as well as farm buildings and homes, some of which were relocated from other parts of Staten Island. 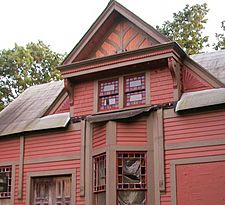 The original New Dorp station building of the Staten Island Railway, which was also relocated from New Dorp.

The creation of the museum site at Historic Richmond Town was the result of efforts by many Staten Islanders, led by local historians and preservationists: Loring McMillen, William T. Davis and local banker David L. Decker. Fueled by the same depression-era passion for historic preservation which resulted in the creation of Colonial Williamsburg, these men wanted to create a testament to Staten Island's rich history in an era of rapid development and urban sprawl.

Established in 1958, Historic Richmond Town is a joint project of the Staten Island Historical Society, an independent nonprofit cultural organization, and the City of New York, which owns the land and the buildings and supports part of its operations with public funds from the Department of Cultural Affairs.

On June 30, 2020 the Board of the Staten Island Historical Society elected Laura Gentile as board director and president, selecting a woman to lead the organization for the second time in its 164 year history. The previous woman was Edna Hayes, who served as president from 1978 to 1989.

The main campus of Historic Richmond Town occupies 25 acres (100,000 m2) of a 100-acre (0.40 km2) site with 15 restored buildings, offering the opportunity to experience the lifestyle of a 300-year-old community. The two churches located outside the museum site are St. Andrew's Episcopal and St. Patrick's RC. A third church, the Reformed Dutch Church of Richmond, was demolished. Mount Richmond Cemetery, operated by the Hebrew Free Burial Association, is also adjacent to the site.

The purpose of this museum village is to make visitors feel as if they are living in the 19th century. Visitors are able to have a first-hand experience of what Historic Richmond Town once was.

Visitors may take a guided tour of various homes and shops that are fully furnished and restored to specific periods of interpretation; other buildings are in the process of being restored and are not yet open to the public. While Historic Richmond Town is no longer a year-round living history museum (as it was briefly in the 1980s), demonstrations of historic trades, crafts, and basic household activities by costumed museum interpreters take place during certain special events throughout the year and on a regular basis by reservation for visiting school groups. Special events that are open to the public include the Richmond County Fair, quilting classes, Tavern Concerts, Pumpkin Picking at Decker Farm (October), English Country Dancing, Old Home Day, Candlelight Tours, Traditional Dinners, and the Summer Apprenticeship Program.

The Voorlezer's House, dating to c. 1695, is the oldest exhibit as well as the oldest standing elementary school in the United States. Another exhibit to see is the Guyon-Lake-Tysen House, a Dutch Colonial farmhouse dating to c. 1740. The Christopher House, a restoration-in-progress which dates to c. 1720, features the only functioning jambless fireplace in New York City. Among the many structures are outstanding examples of Dutch Colonial and Greek revival architecture, such as The Stephens-Black House, the John Bennett House, The Britton Cottage, the Crocheron House, the Boehm House, the Basket Maker's House and the Treasure House.

In 1987, The society purchased and relocated The Jacob Crocheron farmhouse (built ca. 1819-1820) to Historic Richmond Town from its original location at 84 Woodrow Road in the Annadale section of Staten Island, a distance of over 3.1 miles. In the process of moving the building, DOT issued the house seven traffic tickets that were later forgiven. 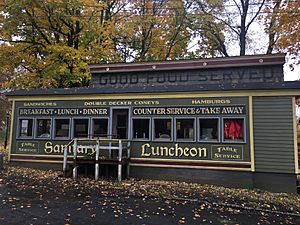 All content from Kiddle encyclopedia articles (including the article images and facts) can be freely used under Attribution-ShareAlike license, unless stated otherwise. Cite this article:
Historic Richmond Town Facts for Kids. Kiddle Encyclopedia.