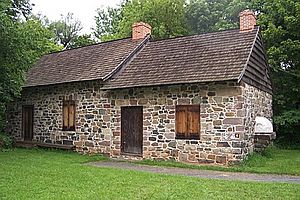 The Christopher House is a stone masonry farmhouse at Historic Richmond Town in Staten Island, New York City. It is associated with two of the oldest Staten Island families. It was also used as a meeting place during the American Revolution, while being the residence of Joseph Christopher, a member of the Richmond County Committee of Safety from 1775-1776. It was moved to Historic Richmond Town in late 1969 and restored for museum presentation from 1975-1977.

According to reporting by the Landmarks Preservation Commission in 1967, the original section was built in 1756, and a section twice that size believed to be added about 1764. Current Historic Richmond Town institutional belief, based on extensive research by Loring McMillen, places those dates earlier, to circa 1720 for the original portion, with the addition from circa 1730.

The structure is built in the Colonial salt-box tradition and was originally situated in the section of Staten Island now called Willowbrook. While there, it stood on the brink of the treacherous marshes that covered a great portion of the Island, known as the great swamp. The building consists of two sections, with 22-inch thick native fieldstone walls with wood above. It is one and one-half stories tall, with a low cellar and gable roof.

The structure was originally near 819 Willowbrook Road, Staten Island. The proximity of the homestead on its original property to the Groad Swamp of those days offered opportunities for escape, in case of surprise, for those who attended the clandestine meetings held in this house during the Revolutionary War.

Inhabitants and Their Occupations

On September 13, 1966, the Landmarks Preservation Commission held a public hearing on the proposed designation of the Christopher House as a Landmark as well as that of the related Landmark site. The hearing had been duly advertised in accordance with the provisions of the law. Two witnesses spoke in favor of designation; there were no speakers in opposition. The owner of the property indicated to the Commission that he was in favor of the proposed designation. The building was granted NYC Landmark status on December 13th, 1967.

In early 1969 the History Committee sent a letter to Senator John Marchi asking for support to preserve the Christopher House. There was also a petition presented showing community support for the preservation of the house.

The community signed the petition, stating:

Whereas Vernon B. Hampton of Staten Island, New York, on a number of occasions through the years has urged the preservation of the Christopher House - a shrine of Patriotism during the American Revolution - Headquarters of the Staten Island Committee of Sarety, and a successful meeting place and shelter for General Washington's secret agents within enemy lines during the long war years of the struggle for American Independence, and
Whereas It is especially appropriate that Acquisition and Restoration of the Christopher House located near Willowbrook Road be implemented at this time in order to assure that the historic shrine shall be the focal point of Staten Island's observance in 1976 of the Bicentennial of American Independence, and
Whereas The significance of the shrine to Richmond County and the State of New York suggests that New York State acquire the Christopher House and a small parksite around it to bring the goal of preservation into actuality. Therefore
I am pleased to join with others in signing this petition and thus promote popular support for the Christopher House Preservation Movement and perhaps the formation of a Christopher House Association.

All content from Kiddle encyclopedia articles (including the article images and facts) can be freely used under Attribution-ShareAlike license, unless stated otherwise. Cite this article:
Christopher House (Staten Island) Facts for Kids. Kiddle Encyclopedia.