The Payne Whitney Gymnasium is the gymnasium of Yale University. One of the largest athletic facilities ever built, its twelve acres of interior space include a nine-story tower containing a third-floor swimming pool, fencing facilities, and a polo practice room. The building houses the facilities of many varsity teams at Yale, including basketball, fencing, gymnastics, squash, swimming, and volleyball. It is the second-largest gym in the world by cubic feet and the 94th largest in the United States by square footage.

The building was donated to Yale by John Hay Whitney, of the Yale class of 1926, in honor of his father, Payne Whitney. Because it was designed in the Gothic Revival style that prevailed at Yale between 1920 and 1945, it is commonly known as "the cathedral of sweat". For the design of Payne Whitney Gymnasium, architect John Russell Pope was awarded the Silver Medal at the 1932 Olympic Games Art Competition.

The stuffed original Handsome Dan, the bulldog mascot of Yale and the first college mascot in the United States, resides in a glass cabinet near the entrance to the building. 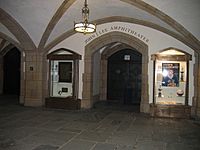 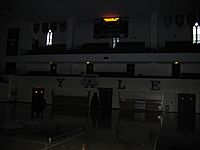 The basketball team plays in the John J. Lee Amphitheater, which was named in 1996 for John J. Lee, '56 M.Eng., a star basketball player and benefactor in restoration projects; the volleyball and gymnastics teams also compete in the Amphiteater. The wing opposite the Amphiteater houses the Robert J. H. Kiphuth Exhibition Pool (6 lanes, 25 yards), where the swimming teams compete. The pool is named for Yale's legendary swimming coach and athletic director.

The tower itself contains the Kiphuth Trophy Room (where mementos from Harvard-Yale game balls to Olympic gold medals are displayed), several multi-purpose recreational areas, the fencing salon, and the gymnastics studio.

The Lanman Center, located behind the Amphitheater wing, provides a vast spread of additional flexible floor space, with a balcony running track ringing the facility. 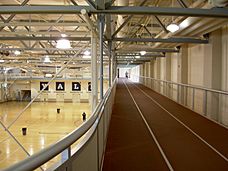 The William K. Lanman Center was added in 1999 as a new wing, with additional courts for basketball and volleyball, and an indoor running track. This was the first phase of a $100 million renovation program.

In 2006, the building is having external work done to repair flashing and stop leaks. Other work includes the purchasing of banners and benches for the Kiphuth Exhibition Pool, the resurfacing of the floor in the Lee Amphitheater, and the upgrading of the Practice Pool's filtration system.

All content from Kiddle encyclopedia articles (including the article images and facts) can be freely used under Attribution-ShareAlike license, unless stated otherwise. Cite this article:
Payne Whitney Gymnasium Facts for Kids. Kiddle Encyclopedia.