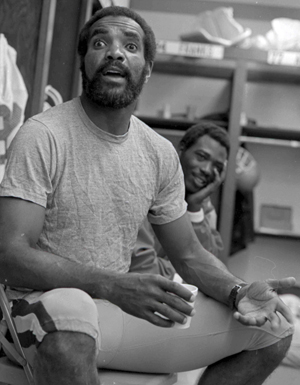 Calvin Hill (born January 2, 1947) is an American retired football player. For twelve seasons, he played running back in the National Football League. He played for Washington Redskins, the Dallas Cowboys, and the Cleveland Browns.

Hill was honored by Yale University for a Doctor of Humane Letters degree.

Hill was born in Baltimore, Maryland.

All content from Kiddle encyclopedia articles (including the article images and facts) can be freely used under Attribution-ShareAlike license, unless stated otherwise. Cite this article:
Calvin Hill Facts for Kids. Kiddle Encyclopedia.