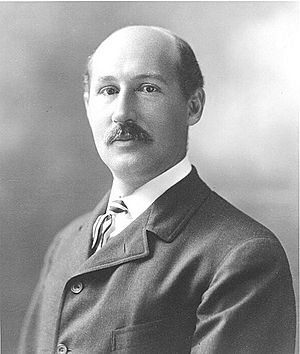 Camp was born in New Haven, Connecticut on April 17, 1859. His parents were Leverett and Ellen Camp. He attended Hopkins Grammar School in New Haven. He went to Yale in 1876. He graduated in 1880.

Camp's football inventions include the eleven-man team and the gridiron marking of the field. He also invented the line of scrimmage and the modern point system. He invented the "All-American team" of college players. "All-American" has since become a part of American-English. In time, he began to think of American football as his private property. He did not want new additions to the game, like the forward pass.

He stayed at Yale for two more years to study medicine. He started working for a watch company in 1882. In 1888, he married Alice Graham Sumner. They had two children. In 1903, he became president of the watch company. Camp died of a heart attack on March 15, 1925 in New York City, New York, aged 65.

All content from Kiddle encyclopedia articles (including the article images and facts) can be freely used under Attribution-ShareAlike license, unless stated otherwise. Cite this article:
Walter Camp Facts for Kids. Kiddle Encyclopedia.