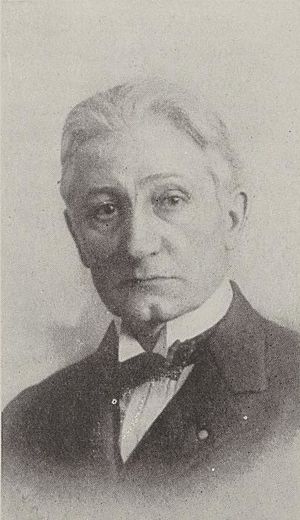 Caspar William Whitney (September 2, 1864 – January 18, 1929) was an American author, editor, explorer, outdoorsman and war correspondent. He originated the concept of the All-American team in college football in 1889 when he worked for Harper's Magazine.

Caspar Whitney was the son of John Henry Whitney (1833-1869) and Amelia D Goldermann, born in Boston, Massachusetts. He was educated at Saint Mathew's College in California. During the Spanish–American War, Whitney submitted articles from the front in Cuba. At the Battle of Las Guasimas, he accompanied General Young's 1st and 10th (Regular) Cavalry. His published map of the battle is considered the most accurate of that action published at that time. His depiction of the fighting on the right is made from personal observation. His depiction of the left where the Rough Riders fought was based on post-battle interviews.

From 1900, he was an owner and editor-in-chief of the monthly Outing magazine, which promoted the outdoors and sporting pursuits, as well as a good deal of adventure fiction; authors included Jack London and Clarence E. Mulford. He was a founding member of The Explorers Club (1904) after expeditions in North and South America. He later edited Outdoor America. He declared bankruptcy in 1910.

As a sports journalist he was an advocate of athletic amateurism and was a member of the International Olympic Committee (1900–1905) and the American Olympic Committee (President 1906–1910). He wrote on a wide range of subjects including big-game hunting, inter collegiate sporting contests (especially football and baseball), amateur versus professional contests, and the Olympic games. In the early 1900s, he edited "The American Sportsman's Library," a quality series of 16 volumes.

During World War I, Whitney was involved in Europe with the Committee of Belgium Relief (1915), and then War Correspondant of the New York Tribune (1917-1918).

Whitney married three times: Anna Childs in 1889, Cora Adele Chase in 1897, and Florence Canfield in 1909. The last was the daughter of the colorful miner and industrialist Charles A. Canfield (1848-1913) (the subject of a Whitney biography). She participated in founding the League of Women Voters and remained active politically until her death in a motor vehicle accident in 1941.

All content from Kiddle encyclopedia articles (including the article images and facts) can be freely used under Attribution-ShareAlike license, unless stated otherwise. Cite this article:
Caspar Whitney Facts for Kids. Kiddle Encyclopedia.