Madison Heights is a city in Oakland County of the U.S. state of Michigan. It is a suburb of Detroit. As of the 2010 census, its population was 29,694.

Originally part of Royal Oak Township, Madison Heights incorporated as a city by popular vote on January 17, 1955, and chartered on December 6 that same year, becoming the tenth city government in southern Oakland County. At that time, the 7.2 square miles (18.6 km2) city was one of the largest suburban communities in the Metro Detroit area. The first city hall was located at 26305 John R Road, the former township offices. On April 5, 1963, a new municipal building was dedicated which is on the present location at 300 West Thirteen Mile Road. The city lies in the Interstate 696 (I-696) and I-75 corridor and is served by two primary school districts, Lamphere and Madison, as well as a full-service municipal government. Today, Madison Heights' mayor is Brian Hartwell.

Madison Heights is part of Oakland County's Automation Alley. There are more than 1,300 commercial and industrial businesses and services within the city's 7.2 square miles (18.6 km2), and the city is proud to have a majority of small businesses, as well as more than 100 major companies within its borders, such as Best Buy, Coca-Cola, Commercial Steel Treating Corporation, Costco, CVS Pharmacy, Henkel Technologies, Home Depot, Meijer, Micro Center, Ogura Corporation, Sam's Club, Hungry Howie's, Target, UPS, WOW!, Culver's, and Sears. The city has 23 shopping centers, 11 hotels, more than 860,000 square feet (80,000 m2) of office space, and seven industrial parks that include 10,000,000 square feet (900,000 m2).

While 91% of the buildings in Madison Heights are single-family homes or condominiums (approximately 9,800 residential property owners), 60% of the tax base is fueled by light industrial or commercial property. Madison Heights was named a "High Tech Hot Spot" by a local magazine. The city's average number of fires per 1,000 people is 4.12, well below the national average of 6.7 fires per 1,000 people. The city contains 15 voting precincts, totaling more than 21,000 registered voters. Robert Earl Richardson was the first Chief of Police when the city was chartered in December 1955.

There are more than 112 miles (180 km) of road within Madison Heights, of which the city maintains 105 miles (169 km), 95 miles (153 km) for snow removal, sweeping, and patching. Interstate 75 passes north to south on the west side of the city, and Interstate 696 is the major feature of its southern border. The junction of these two highways is shared with Royal Oak and Hazel Park on the southwest corner of Madison Heights.

As of the 2010 census Madison Heights had a residential vacancy rate of 7.1%. 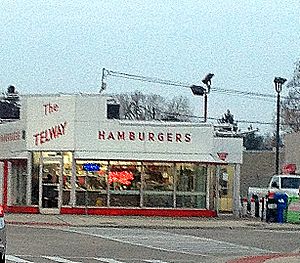 The Telway Hamburger System is a long-standing 24-hour restaurant in Madison Heights known for its sliders (small hamburgers) and its unique late-night crowds.

The Chinese Cultural Center is located in Madison Heights.

There were 12,712 households of which 27.5% had children under the age of 18 living with them, 41.0% were married couples living together, 12.9% had a female householder with no husband present, 5.4% had a male householder with no wife present, and 40.7% were non-families. 34.1% of all households were made up of individuals and 11.8% had someone living alone who was 65 years of age or older. The average household size was 2.32 and the average family size was 3.02.

168 Asian Mart (168亚洲超市), a 38,000-square-foot (3,500 m2) supermarket, is the largest Asian supermarket in southeast Michigan, and one of the largest in the state. the store, owned by Ricky and Cindy Dong of Troy, opened on Monday June 1, 2015. Ricky Dong originated from Fuzhou, Fujian, China.

The Chinese Cultural Center (CCC) is located in Madison Heights.

All content from Kiddle encyclopedia articles (including the article images and facts) can be freely used under Attribution-ShareAlike license, unless stated otherwise. Cite this article:
Madison Heights, Michigan Facts for Kids. Kiddle Encyclopedia.