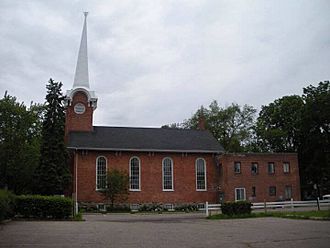 Waterford Village is an historic community in Waterford Township, Michigan. First settled in 1819, the village is located in the northernmost part of the township along Dixie Highway, on the southeast shore of Van Norman Lake.

In 1818, Mr. and Mrs. Alpheus Williams, their four daughters and two sons, along with Captain Archibald Phillips and Major and Mrs. Oliver Williams, with their eight children, set out to settle Oakland County.

In 1818, the Oliver Williams family established the first farm settlement in the county on the banks of Silver Lake.

Archibald Phillips and Alpheus Williams continued on northward about nine miles to where the Clinton River crossed the old Saginaw Trail. This area would become Waterford Village. Here the first house of the village was built by Alpheus Williams on the north bank of the river across from the south corner where Grand River Street met the Saginaw Trail. Williams and Phillips also built the first dam where the Clinton River crossed over the Saginaw Trail and erected the first saw mill there.

In 1844, Dr. George W. Williams (b.1793-d.1845) built the first gristmill in Waterford on what later became Mill Street. George was no relation to Alpheus or Oliver.

Early pioneers owning land tracts in the village in 1872 include:

Business owners in the village in 1972 include:

Waterford Village was designated a Michigan State Historic Site on June 18, 1976 and was listed on the National Register of Historic Places on August 10, 1979.

Included in the historic district are also the original houses and buildings on Dubay Street, Pontiff Street (originally Pond Street), and Steffens Street.

The first store in the village was the home of Alpheus Williams where he kept of few shelves of staples. After his death, the land exchanged hands many times. In 1837, Merrick and Bruce purchased it and built the first established store next to the original home of Alpheus Williams on the north bank of the Clinton River on Dixie Highway. The store remained in operation for many years.

The general store had nine different proprietors between 1857 and 1927:

The general store housed everything needed for the village and surrounding community. From dry goods and tools to certain foods, patent medicines, household utensils, fancy jewelry, material for clothing, shoes, hats, cracker barrels, and even hard candy and a small selection of toys.

James R. Jones had the first telephone in the village installed in his store.

The Waterford General Store also had attractions for the local residents and the summer vacationers as well. The second floor of the store had a roller skating rink for a time and also was used as a theater for a period. James R. Jones and his wife Isabelle actually lived above the store for a while.

The general store was the heart of the community. The store served as a meeting place for friends, who swapped stories and debated politics

The storekeeper knew the latest news and often served as the Justice of the peace, and the village Postmaster. In 1865, John G. Owen became the first postmaster in Waterford Village. When zip codes were introduced in 1963, Waterford's zip code became 48095.

The store was idle for a few years in the early 1900s, but the second floor was used as a justice court, and a dance hall.

In 1927, Henry Ford purchased the store from August V. Jacober for $700. The store was moved and currently stands in Greenfield Village in Dearborn, Michigan. August Jacober built another store in the same location in Waterford Village and ran it until 1957.

In 1869, a Baptist church became the first church built in Waterford Village. It later became a Methodist church.

The church is still standing at 5860 Andersonville Road near Dixie Highway. It was renovated in 1976 after being purchased by Waterford Township.

In 1901, the first school was established in Waterford Village on Steffens Street and Andersonville Road. In 1910, the wooden school burned down but was rebuilt.

In 1927, a two story brick building was built at 4241 Steffens Street. The elementary school was renamed Waterford Village School.

In 2014, Waterford Village School, the oldest in Waterford Township, was closed. The Waterford School District has since turned the school into four preschool classrooms.

In 1922, the Old Mill Tavern was built by Louis Dorman (b.1895-d.1976) in Waterford Village. It was located at 5828 Dixie Highway where the road crosses of the Clinton River. It was the most popular restaurant in Waterford Village for over a half century.

The tavern was destroyed by fire in 1982 and was never rebuilt.

All content from Kiddle encyclopedia articles (including the article images and facts) can be freely used under Attribution-ShareAlike license, unless stated otherwise. Cite this article:
Waterford Village, Michigan Facts for Kids. Kiddle Encyclopedia.