Lake Orion ( ORR-ee-ən) is a village in Oakland County in the U.S. state of Michigan. The population was 2,973 at the 2010 census. "Lake Orion" is often used to describe both the village and the much larger Orion Township, of which the village is a part.

Lake Orion began as a resort town and over time has incorporated elements of a bedroom community.

Judah Church and Moses (or Samuel) Munson were among the first settlers. Munson, who arrived in 1824, built a sawmill in 1825, and planted the first orchard. Jesse Decker arrived from upstate New York with his wife, Mary, in 1825. Decker proved to be energetic and became "everything to everybody," so that the place soon became known as "Decker's Settlement," and the town was called "Canandaigua," after Canandaigua, New York, where the settlers originated. The settlement grew into a bustling commercial center with a sawmill, tavern, post office, general store, blacksmith shop, school and cemetery. In 1828, a power dam was built uniting several small lakes and forming the mile wide Lake Canandaigua, just west of the village.

In 1830, Jesse Decker raised the first frame barn in the area with the help of local Indians. The first post office was opened in 1832, with Decker as postmaster. In 1835, the community's name was changed from Canandaigua to Orion, and as a result, Lake Canadaigua would be renamed Lake Orion. The same year, the Township of Orion was formally approved by the Michigan Territorial government. Jesse Decker became the first Supervisor of Orion, with a salary of $2.00 a year. By 1836, two persons were licensed to keep taverns in the town, one of whom was Decker. Decker was elected to the first Michigan House of Representatives in 1837 and also served as justice of the peace for the Orion area. By 1840 Decker owned 440 acres (1.8 km2) of land.

In 1909 a Marine Postal Center was established, with mail delivered to over three hundred cottages on the lake and islands by way of boat. Lake Orion was the first town in the United States to have this service.

Also in 1929, the village known as "Orion" was officially renamed "Lake Orion." To this day, no one knows why 'Orion' is pronounced "aw-ree-un."

The Village of Lake Orion was served by trains on the Michigan Central Railroad from 1872 to 1976, and the Detroit United Railway interurban system from 1899 to 1931. Each service had its own track and depot, although both were named "Orion" and located in the village near the intersection of M-24 and Flint Street. Lake Orion also had a flag stop, Rudds Station, on the MCC line east of the village near Clarkston and Kern Roads. Rudds Station served Rudds Mill, a milling operation on Paint Creek that produced wheat for the region. The MCR line ran from Detroit to Mackinaw City, and the Flint Division of the DUR line ran from Royal Oak to Flint. With the increased popularity of the automobile and the paving of M-24 in 1929, passenger service on the DUR was ended in 1931, and track was scrapped during the 1940s for a World War II metal drive and little remains of the corridor. The MCR line maintained passenger service until 1950, and freight service continued until the 1970s. The ownership of the MCC track passed through New York Central and Penn Central and operated until 1976, when it was closed after acquisition by Conrail. The original MCR rails and track east of M-24 were completely removed, and the line from the village southward towards Rochester, Michigan now serves as the recreational Paint Creek Trail. The line from the village northward to Oxford exists now only as a narrow path, but still passes over the historic Indian Lake Road Stone Arch Bridge, a small limestone bridge that was constructed over Indian Lake Road in 1891.

Lake Orion was also served by trains on the Grand Trunk Western Railroad "Polly Ann" line, which ran from Pontiac, Michigan to Caseville, Michigan, passing through the western half of Orion Township. Two flag stop stations served Lake Orion on the Polly Ann line. Eames Station was located near the intersection of Joslyn and Silverbell Roads, and Cole Station was near the intersection of Joslyn and Clarkston Roads. A short section of the track is still in use as of 2014, operated by Canadian National Railway specifically to connect the General Motors Orion Assembly plant with the CN main line in Pontiac. However, all track north of Orion Assembly was eliminated and eventually removed by 1985. In 1993, a Rails To Trails federal grant was awarded and matched by the Michigan DNR providing more than $728,000 to purchase the right-of-way from Grand Trunk. The corridor now serves as the recreational Polly Ann Trail, connecting Lake Orion with Oxford, Addison Township, and the Village of Leonard. 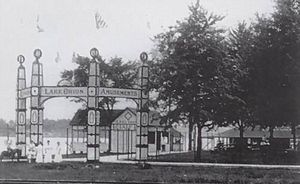 Lake Orion as a resort and amusement destination in the early 20th century.

Lake Orion was an amusement destination amongst the residents of Metro Detroit in the first half of the 20th century. The addition of the Michigan Central Railroad track in 1872 had set the stage for Lake Orion as a major summertime resort for those travelling on the line, especially between Detroit and Flint. In 1874, several prominent citizens formed the Orion Park Association to capitalize on the growing number of travellers to the area. They developed a park on the shore of the lake (now Green's Park) near the train depot, and operated a steam-powered boat for lake excursions and delivery to Park Island. Over time, the Park Island Amusement Park grew to include a penny arcade, carousel, souvenir booths, refreshment booths, lunch stands, dining rooms, dance halls, and a wooden roller coaster named "The Thriller." The swimming beach located on the north side of Park Island had both a men's and ladies' bathhouse, a waterslide, and numerous diving boards, with the highest being 42 feet above water. Lake Orion was stocked annually with bass, pickerel, and pike, and fishing tournaments and contests were held seasonally. Several double-deck boats, including the “City of Orion,” offered lake excursions replete with bands and a dance floor on the upper deck. At night, Park Island was illuminated by strings of thousands of lights.

At one time a premier destination amongst vacationers, the park suffered through the Great Depression and several fires, gradually losing business before closing permanently in 1955. The park was under the ownership of the Detroit Edison Company (via purchase of a subsidiary, the Orion Power and Light company) from 1912 until closure. The island and park property was later purchased by a private real estate developer who built homes on the island in the 1960s.

In many brochures and newspaper advertisements in the 1910s and 1920s, Lake Orion was advertised to potential travellers as the "Venice of the Middle West," "Paris of Detroit," and "Lake Orion, the One Best Resort."

The story of the Lake Orion Dragon says that sometime in the 1800s, a group of local children played a prank by building a fake dragon and launching it out in the lake. A number of people saw it and soon Lake Orion was known for its dragon. There are a number of stories as to who made it and how they built it but it is widely agreed that it was a prank.

"That same year [1894] the Lake Orion 'dragon' made its entrance into Orion history. First seen by two ladies near the present Robert’s Rondevoo cove, the animal grew in length as the story grew in listeners. What had started out as an average-sized lake monster was claimed by some to be at least eighty feet long. Detroit and other newspapers joshingly suggested, upon hearing of the behemoth, that Orion residents should 'drink more well water in the future.'" The nickname of Lake Orion High School's sports teams (the Dragons) is derived from this.

Lake Orion (less commonly known as "Orion Lake") is a medium-sized inland lake, with area of 506 acres. It has a maximum depth of 80 feet and an average depth of 16 feet. The lake is located within the Village of Lake Orion and Orion Township. It is the eighth largest lake by area in Oakland County.

The current area of the lake was formed by a collection of smaller lakes over time, beginning with the damming of Paint Creek in the 1830s. Canals have also been dredged to maximize lake frontage.

There is a public access boat launch on the northern side of the lake. It is administered by the Michigan Department of Natural Resources.

There are several islands in Lake Orion, some of which feature seasonal and year-round residences. The largest islands, Bellevue and Park, are connected to the mainland by two-lane bridges and are populated year-round. Most boats can pass under the Bellevue Bridge, which has a clearance of 9.6 feet. The Park Island bridge has a lower clearance that allows only canoes, kayaks and rowboats to pass underneath. The remaining islands are reachable only by watercraft. Victoria Island is the third largest island, and is home to several seasonal and year-round homes. A smaller island, Squaw Island, was home to a single residence from the 1850s to the 1950s. Little remains of the island due to erosion save for a solitary tree, and the shallow waters can be a hazard to boaters. Sweet's Island is home to the Lake Orion Boat Club, and features a private boathouse and docks for LOBC members. Romance Island is home to a single cottage, Preston Island to two seasonal cottages, Dot Island to one seasonal cottage and Armada Island to four seasonal cottages. The residences on all islands except for Bellevue and Park require the use of watercraft to travel to and from the mainland.

There were 1,304 households of which 27.0% had children under the age of 18 living with them, 40.0% were married couples living together, 10.7% had a female householder with no husband present, 3.8% had a male householder with no wife present, and 45.6% were non-families. 38.0% of all households were made up of individuals and 11.7% had someone living alone who was 65 years of age or older. The average household size was 2.19 and the average family size was 2.93.

All content from Kiddle encyclopedia articles (including the article images and facts) can be freely used under Attribution-ShareAlike license, unless stated otherwise. Cite this article:
Lake Orion, Michigan Facts for Kids. Kiddle Encyclopedia.