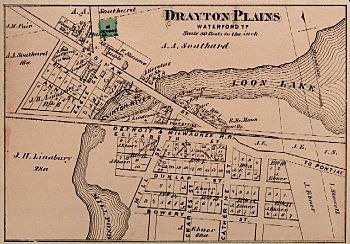 Drayton Plains was never incorporated as a municipality.

It is located on Dixie Highway near the west end of Loon Lake.

In 1818, the Land Office opened in Detroit offering land for $2.00 an acre. Horatio Foster, Jonathan Perry, and brothers Harvey and Austin Durfee were among the first to take advantage of the opportunity to become land owners in the wilderness north of Detroit.

In 1822, Horatio Foster and his wife were the first to settle in what would become Drayton Plains, although just temporarily as they moved northward a few years later where they permanently settled.

In 1823, the first to establish permanent homes in Drayton Plains were Jonathan Perry, Harvey Durfee and Austin Durfee.

In 1825, the Erie Canal opened, linking the waters of Lake Erie in the west to the Hudson River in the east. The canal made travelling from the east easier, which resulted in an influx of settlers moving into the Michigan Territory.

In 1829, construction began on a road north from Detroit along the Saginaw Trail, allowing for easier passage into the wilderness north of the city.

In 1835, Daniel Windiate emigrated from Berkshire, England to what soon would be called Drayton Plains. There, he built a dam and mill and named the mill Drayton after his England home, Drayton. He died in Drayton Plains in 1843.

Drayton Plains was informally referred to as a village and maintained its own identity and post office beginning on February 4, 1835. The first post office was on Mill Street (later Hatchery Road).

In 1837, Michigan became the 26th State, thus attracting settlers by the score.

In 1838, the first burial took place at Drayton Plains Cemetery (located on Walton Blvd. and Williams Lake Road). The six-week old infant son of Daniel and Martha Windiate was laid to rest there.

In 1839, the Drayton Plains Hotel was built by Daniel Windiate along the Saginaw Trail (later Dixie Highway), across from Sashabaw Road.

Drayton Plains was platted in 1860. In that year the town was laid out by Lewis L. Dunlap.

By 1860, the population of Waterford Township had climbed to 1,289. As Drayton Plains continued to grow, more retail establishments began to open. In 1865, John Linabury built the first stable in Drayton Plains and the first cider mill was built in the 1860s by John Kirodot.

Other business owners in Drayton Plains in 1872 included:

William Besley (or Beasley), son-in-law of Daniel Windiate, owned a general store, which also later served as a post office, election hall, Sunday school and Saturday night dance hall. It even housed Meinrad Hangee’s tin shop., and block ice was cut from Loon Lake by Pittman and Dean Ice House and sold throughout the area.

Early pioneers owning land tracts in Drayton Plains in 1872 include:

Many of Drayton Plains' streets were named after local pioneers such as Denby, Covert, Frembes, Linabury, Meinrad, Van Syckle and Van Zandt.

The Drayton Plains State Fish Hatchery was listed as a Michigan Historic Site on August 24, 1984.

Today, the former fish hatchery is the site of the Drayton Plains Nature Center, located at 2125 Denby. Situated on 138 acres, with an expanse of nearly one mile in length, it exhibits nature in various forms. The grounds include woods, ponds, streams and a prairie. Along with expansive trails, it offers an interpretive center that houses displays of specimens in their natural habitat.

As the 20th Century began, the Drayton Plains train depot was opened. Built in 1908 by the Detroit, Grand Haven and Milwaukee Railway, a subsidiary of the Grand Trunk Railroad, the depot stood on the northeast corner of Mill Street and Saginaw Trail (situated on the south side of the tracks).

The depot was closed in 1957 and was demolished in 1965. A replica of the depot was built in 1995 and it stands at the Waterford Historical Society. In 1929, the Community Presbyterian church was opened at 4301 Monroe Avenue near Sashabaw Road.

The Drayton Theater, built in the 1940s, was the only movie theater in Drayton Plains. It was located on Dixie Highway between Sashabaw Road and Monroe Street.

In 1942, the Drayton Men’s Club developed Drayton Ball Park at Dixie Highway and Sashabaw Road. The ballpark is still in operation today as Shell Park.

A lumber yard, Burke Lumber, was built on the corner of Dixie Highway and Frembes Road around the mid-1940s. It was destroyed by fire in the 1960s. Today, the lot remains vacant.

In 1950, a portrait studio, Sayles Studio, opened at 4431 Dixie Highway near Monroe Street. Eventually the youngest of the Sayles children took over the family business, which is now located at 1150 Scott Lake Road in Waterford, Michigan.

The first bowling alley in Drayton Plains was Dixie Lanes, located at 4443 Dixie Highway near Monroe Street. Opened in the 1950s, it later became Primrose Lanes, then Lighthouse Lanes and then Billy G's Lanes. In the early 1970s, the bowling alley was turned into a night club called "Heaven", which featured local bands. Today, the building is a bingo room.

By the end of the 20th Century, the population of Waterford Township, Michigan was 73,150.

The Drayton Plains post office was permanently closed on January 31, 2004. At the same time, all of its functions were transferred to the Waterford Post Office. The zip code for the community became 48329 and its identity has been largely subsumed within that of Waterford Charter Township.

All content from Kiddle encyclopedia articles (including the article images and facts) can be freely used under Attribution-ShareAlike license, unless stated otherwise. Cite this article:
Drayton Plains, Michigan Facts for Kids. Kiddle Encyclopedia.