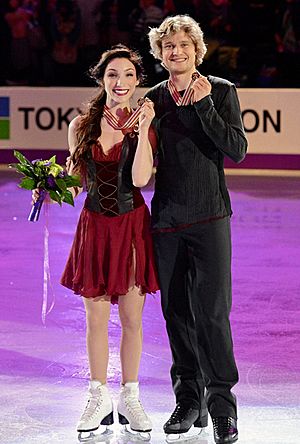 Meryl Davis is an ice dancer from the United States. Her skating partner is Charlie White. They won the junior title at the United States national championships in 2006. In 2007, they won the bronze medal (third place) on the senior level, becoming the first team since Tanith Belbin & Benjamin Agosto to go from being junior national champions to World team members in one season.

Davis and White have skated together since 1997. They are the longest-lasting team still skating in the United States.

In 2006, Davis and White won the bronze medal at the World Junior Figure Skating Championships. Later that year, they became the first team in the world to get the highest level of difficulty for one of their programs. This happened at the 2006 NHK Trophy and put them immediately into the skating spotlight.

Davis and White are coached by Igor Shpilband and Marina Zueva.

All content from Kiddle encyclopedia articles (including the article images and facts) can be freely used under Attribution-ShareAlike license, unless stated otherwise. Cite this article:
Meryl Davis Facts for Kids. Kiddle Encyclopedia.