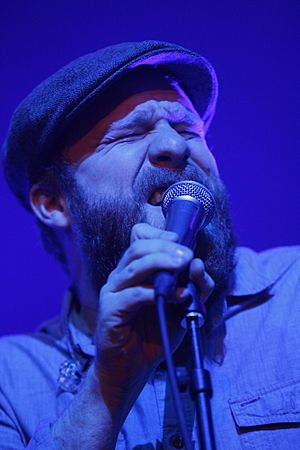 Alexander George "Alex" Clare (14 September 1985, London, England) is a British recording artist, musician and singer. His first album The Lateness of the Hour was put out in 2011. He adopted his stage identity, Alex Clare around 2010.

In 2014, Clare and Jim Duguid won Songwriter of the Year at the ASCAP Awards Night. This was for the song "Too Close".

All content from Kiddle encyclopedia articles (including the article images and facts) can be freely used under Attribution-ShareAlike license, unless stated otherwise. Cite this article:
Alex Clare Facts for Kids. Kiddle Encyclopedia.