Kelis Rogers (born August 21, 1979), better known as Kelis, is an American singer and songwriter. Her most well-known song is "Milkshake". It was nominated for the Grammy Award for Best Urban/Alternative Performance.

Kelis has been recognised at the Brit Awards, Q Awards, NME Awards and Grammy Awards ceremonies. Her musical output, both as a lead and featured artist, encompasses various genres—she has collaborated with R&B and hip hop acts including Busta Rhymes and Clipse, electronic and dance producers such as Calvin Harris, Timo Maas and Richard X, pop and rock acts Enrique Iglesias and No Doubt and indie and alternative musicians including Björk and Dave Sitek.

She has sold six million records worldwide and has had success in the United Kingdom, where ten of her singles have peaked within the top ten of the UK Singles Chart. 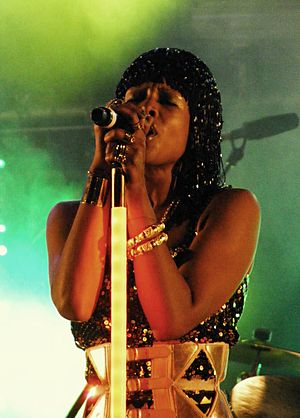 Kelis Rogers was born and raised in the Harlem neighborhood of Manhattan in the Frederick Douglass Houses. Her first name is a mixture of her father's name, Kenneth and her mother's name, Eveliss. Her father Kenneth was an African-American jazz musician and Pentecostal minister and was formerly a professor at Wesleyan University. Her mother Eveliss is a Chinese-Puerto Rican fashion designer who inspired Kelis to pursue her singing career. She has three sisters, Kelis being the third born of the four girls.

As a child, Kelis sang in church choirs and played violin, piano and saxophone while attending Manhattan Country School, a private school, she continued her education at the Fiorello H. LaGuardia High School of Music & Art and Performing Arts, where she formed the R&B trio BLU (Black Ladies United). Kelis was also a bartender and a sales associate at a clothing store before graduating high school. Afterwards, a friend introduced Kelis to The Neptunes (Pharrell Williams and Chad Hugo); they formed a strong bond, and, with their support, she landed a record deal with Virgin Records.

Kelis met rapper Nas at an MTV Video Music Awards party in 2002; they dated for one year before becoming engaged in 2004, and marrying in January 2005. In April 2009 she filed for divorce. She was seven months pregnant at the time. In July 2009, Kelis gave birth to a son. The couple's divorce was finalized in May 2010. Kelis married real estate agent Mike Mora in 2014, she gave birth to a second son in November 2015.

All content from Kiddle encyclopedia articles (including the article images and facts) can be freely used under Attribution-ShareAlike license, unless stated otherwise. Cite this article:
Kelis Facts for Kids. Kiddle Encyclopedia.