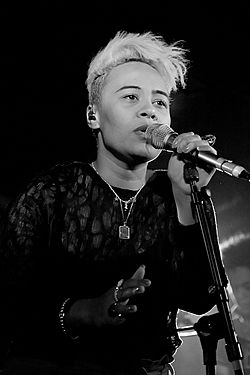 Adele Emeli Sandé MBE best known as Emeli Sandé (born 10 March 1987) is a British singer and songwriter. She was born in Sunderland, Tyne and Wear to an English mother and Zambian father. She was raised in Alford, Aberdeenshire. She became famous after writing many songs for artists like Rihanna, Leona Lewis and Susan Boyle.

In 2010 she singed a contract with EMI. She then released two singles, "Read All About It" and "Beneath Your Beautiful", which went on top of the British charts. In 2012 she won the Brits Critics Choice award. Her first album, Our Version of Events, was very successful, selling more than 100,000 copies in the first week. It was the best-selling album in the UK of 2012. She performed at the opening ceremony of the London 2012 Olympics.

Sandé married Adam Gouraguine in Montenegro in 2012. They later divorced in 2014.

All content from Kiddle encyclopedia articles (including the article images and facts) can be freely used under Attribution-ShareAlike license, unless stated otherwise. Cite this article:
Emeli Sandé Facts for Kids. Kiddle Encyclopedia.