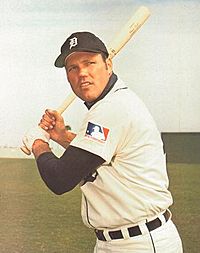 William Ashley Freehan (born November 29, 1941) is an American professional baseball player. He played his entire fifteen-year Major League Baseball career as a catcher for the Detroit Tigers in 1961 and again from 1963 to 1976. He was born in Detroit, Michigan.

Freehan was diagnosed with Alzheimer's disease in his later years. In October 2018, it was revealed that Freehan was in hospice care at his home in Michigan.

All content from Kiddle encyclopedia articles (including the article images and facts) can be freely used under Attribution-ShareAlike license, unless stated otherwise. Cite this article:
Bill Freehan Facts for Kids. Kiddle Encyclopedia.