Mayim Bialik is an American actress, author, and neuroscientist. From 1991 to 1995, she played the title character of the NBC sitcom Blossom. Since 2010, she has played Amy Farrah Fowler – like the actress, a neuroscientist – on the CBS sitcom The Big Bang Theory, a role for which she has been nominated four times for the Primetime Emmy Award for Outstanding Supporting Actress in a Comedy Series, and won the Critics' Choice Television Award for Best Supporting Actress in a Comedy Series in 2016 and 2018.

Mayim Chaya Bialik was born on December 12, 1975, in San Diego, California, to Barry and Beverly (née Winkleman) Bialik. Her family were Jewish immigrants who lived in The Bronx, New York City, and three of her four grandparents migrated from Poland, Czechoslovakia, and Hungary. Bialik was raised as a Reform Jew, but now considers herself to be Modern Orthodox Jewish. Bialik has also described herself as a "staunch Zionist". Her personal name, Mayim ('water' in Hebrew), originates in a mispronunciation of Miriam, her great-grandmother's name. Hayim Nahman Bialik is her great-great-grandfather’s cousin.

Bialik attended Walter Reed Junior High School (now Walter Reed Middle School) and graduated in 1993 from North Hollywood High School in North Hollywood, California. While completing filming on Blossom she received acceptance offers from UCLA, Yale, and Harvard. In acknowledgment of her acting commitments, she was granted a deferred acceptance and attended UCLA. She stated that she wanted to stay close to her parents and did not want to move to the East Coast.

Bialik earned a B.S. degree in neuroscience, with minors in Hebrew and Jewish studies, and went on to study for a doctorate in neuroscience. She took a break from studies in 2005 to return to acting. Bialik returned to earn her Ph.D. in neuroscience from UCLA, in 2007. Her dissertation was an investigation of hypothalamic activity in patients with Prader–Willi syndrome, entitled "Hypothalamic regulation in relation to maladaptive, obsessive-compulsive, affiliative and satiety behaviors in Prader–Willi syndrome."

Bialik married Michael Stone on August 31, 2003, in a Victorian-themed ceremony that included traditional Jewish wedding customs. Stone was born into a Mormon family and converted to Judaism. Bialik and Stone have two sons, Miles (b. 2005) and Frederick (b. 2008). The couple divorced in November 2012. 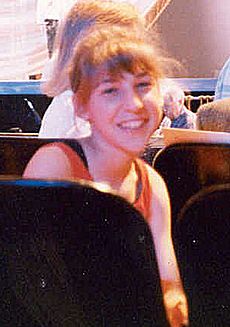 Bialik at the rehearsal for the 1989 Academy Awards

All content from Kiddle encyclopedia articles (including the article images and facts) can be freely used under Attribution-ShareAlike license, unless stated otherwise. Cite this article:
Mayim Bialik Facts for Kids. Kiddle Encyclopedia.