Extreme Ghostbusters is an American animated television series, a follow-up to the animated series The Real Ghostbusters. It is a part of the Ghostbusters franchise. The series originally aired on the Syndicated BKN block in 1997, and features a team of younger college-level Ghostbusters who are led by veteran Ghostbuster Egon Spengler. In some TV listings, the show was called Ghostbusters Dark.

Set years after the end of The Real Ghostbusters, lack of supernatural activity has put the Ghostbusters out of business. Each member has gone their separate way, except for Dr. Egon Spengler, who still lives in the firehouse to monitor the containment unit, take care of Slimer, further his studies and teach a class on the paranormal at a local college. When ghosts start to reappear, Egon is forced to recruit his lone four students as the new Ghostbusters. These are Kylie Griffin, a goth girl genius and expert on the occult; Eduardo Rivera, a cynical Latino slacker; Garrett Miller, a young white paraplegic athlete who uses a wheelchair; and Roland Jackson, a studious African-American machinery whiz. Filling the cast are Janine Melnitz, the Ghostbusters' previous secretary who returns to the job, and Slimer, a hungry ghost.

The series follows the adventures of this "Next Generation" of Ghostbusters tracking down and capturing ghosts all over New York and occasionally beyond the city. The series is styled as a supernatural comedy, following the trend set by its predecessor, but given an updated and darker feel. This is reflected by the use of a gritty, rock/punk-inspired variation of Ray Parker Jr.'s song "Ghostbusters" as the opening theme, written by Jim Latham and performed by voice actor Jim Cummings. Recurring themes throughout the series are the new team learning to work together despite their differences, Janine's largely unrequited affection for Egon, the love-hate relationship between Kylie and Eduardo that is never resolved, and the Ghostbusters' frequent clashes with authority figures who disbelieve their work. 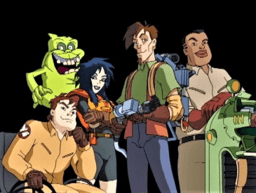 Showrunner Bob Higgins told Ability Magazine that the decision to create a new Ghostbusters was taken by the studio, which hoped to reinvigorate a lucrative franchise. Originally announced as Super Ghostbusters in 1996, the initial press release had Janine, teaching history at a local college, bringing together a new team with "a hip new attitude" to face a new plague of ghosts; "short on time and more than a little desperate, Janine turns to four of her teenaged students". (Egon would be "huddled in front of a computer screen, battling program bugs instead of spooks".)

The show's creators decided "what we wanted to do was really put together a team of misfits in a way, people that you would not necessarily associate with being superheroes on television": hence Eduardo as a slacker, Roland as a "square", and Kylie as moody and sarcastic, with Garrett as the balance, "an adrenaline junkie... who could kind of kick start the team". Fil Barlow, the designer, was given rough outlines and originally designed all the characters bar Eduardo as girls (Garrett as Lucy and Roland as Julia), with Egon originally designed as bearded and robed. This aspect would be dropped. (Barlow pitched "Egon as an ambassador to the ghost realm trying to stop an impending war on the other side".)

During production, Lucy/Garrett was found to be quite bland and annoying until producer Jeff Kline suggested putting the character in a wheelchair; Higgins stated this made Garrett more interesting to write, as he was now "one of these guys that takes what he is given and makes the best of it and really lives up to any potential that he has". When designed as Lucy, she was given proton-blasting callipers and crutches but producer Richard Raynis requested the wheelchair instead. (Barlow attempted to show a female character could "be fearless and gung ho" but Raynis requested the gender change) The show ended up winning an award from the Los Angeles Commission on Disabilities for its work on Garrett.

Various elements would be changed before airing: Egon would replace Janine as the teacher, Slimer lost a goblin sidekick called Gnat, and Garrett was originally "Lucas". Roland was originally a clumsy "gentle giant", Eduardo had a dream of running in the Olympics, and Lucas had a hair-trigger temper. (Some of these still made it to the character profiles on the EGB website)

The team that helmed Extreme Ghostbusters consisted of many producers and writers that had done work on The Real Ghostbusters, including Raynis. As a result, the show was made as an explicit sequel to Real. This made the show one of the few direct sequels to a 1980s cartoon series — other franchises, such as Masters of the Universe and Teenage Mutant Ninja Turtles, opted for series relaunches — and as such opted for a more realistic passage of time. Maurice LaMarche was brought back to play Egon Spengler — though Frank Welker and Laura Summer did not return to play Slimer and Janine, respectively. The series would start to have more explicit tie-ins to Real as it went on — "Slimer's Sacrifice" referenced Egon entering the Containment Unit in an episode of Real Ghostbusters: Xmas Marks the Spot; "Grundelesque," was a direct sequel to Real Ghostbusters episode "The Grundel", bringing back the eponymous villain and revealing Kylie lost a friend during its first attack. Finally and notably was the two-part finale "Back in the Saddle", which featured the remaining original Ghostbusters returning and teaming up with their successors — with Dave Coulier (the second voice of Peter Venkman), Buster Jones (the second voice of Winston Zeddemore), and Frank Welker (the voice of Ray Stantz) all reprising their roles.

The series originally aired on the Syndicated BKN block in 1997.

The show first aired in the Republic of Ireland on RTE Two from 19 February 1998 to 1999. Years later, a short rerun was shown on the same channel in the summer of 2007.

In 1999, three VHS volumes of the show were released by Columbia TriStar Home Video, all of which are now out of print. These videotapes were available to purchase separately or as a packaged boxed set containing all three volumes. The episodes included on the VHS volumes were:

A two-disc DVD set of the series was released in Australia on June 2, 2009 and in the United Kingdom on June 15 the same year, along with Germany, Italy and the Netherlands, all containing the first thirteen episodes of the series, with the UK releases being slightly edited to remove scenes of horror and threat.

There is currently no plan to release the series on DVD in the United States.

The series was re-released in the UK on the 27th of June 2016, once again featuring the first 13 episodes.

In January 2021, the episodes were officially uploaded weekly by the official Ghostbusters YouTube Channel in High Definition.

The cartoon series generated a line of action figures released by Trendmasters. The line included Roland, Eduardo, Kylie, and several ghosts, as well as an updated version of Egon Spengler, and the Ecto-1; Garrett did not have a figure released, although collectors have found a prototype figure. Also released was a role playing Proton Pack and Ghost Trap.

The original website (still available online) contained a Flash tour of the Firehouse, character profiles, descriptions of the ghosts fought, and a Flash game. Some of the character details in the profiles had never made it into an episode.

The "Spengler's Spirit Guide" section contained journal entries by "Egon" himself, about haunted areas and the how-to of ghostbusting. Two of the entries, The Bermuda Triangle and The Jersey Devil, were topics that showed up in episodes.

All content from Kiddle encyclopedia articles (including the article images and facts) can be freely used under Attribution-ShareAlike license, unless stated otherwise. Cite this article:
Extreme Ghostbusters Facts for Kids. Kiddle Encyclopedia.