Recess is an American animated television series created by Paul Germain and Joe Ansolabehere (credited as "Paul and Joe") and produced by Walt Disney Television Animation, with animation done by Grimsaem, Anivision, Plus One Animation, Sunwoo Animation, and Toon City. The series focuses on six elementary school students and their interaction with other classmates and teachers. The title refers to the recess period during the daily schedule, in the North American tradition of educational schooling, when students are not in lessons and are outside in the schoolyard. During recess, the children form their own society, complete with government and a class structure, set against the backdrop of a regular school.

Recess premiered on August 31, 1997, on ABC, as part of the One Saturday Morning block (later known as ABC Kids). The series ended on November 5, 2001, with 65 half-hour episodes and six seasons in total. The success and lasting appeal of the series saw it being syndicated to numerous channels, including ABC's sister channels Toon Disney, which later became Disney XD, and Disney Channel.

In 2001, Walt Disney Pictures released a theatrical film based on the series, Recess: School's Out. It was followed by a direct-to-video second film entitled Recess Christmas: Miracle on Third Street that same year. In 2003, two more direct-to-video films were released: Recess: All Growed Down and Recess: Taking the Fifth Grade. The characters also made an appearance in a 2006 episode of Lilo & Stitch: The Series.

Many episodes of Recess are available on the DisneyLife service in the UK, along with the direct-to-video films. It is also available on Disney+ in several countries, including the US and UK.

Recess portrays the lives of six fourth graders—popular and confident Theodore Jasper "T.J." Detweiler (Ross Malinger, Andrew Lawrence), athletic Vince LaSalle (Rickey D'Shon Collins), tough girl Ashley Spinelli (Pamela Adlon), gentle giant Mikey Blumberg (Jason Davis), genius Gretchen Grundler (Ashley Johnson), and shy new kid Gus Griswald (Courtland Mead)—as they go about their daily lives in a school environment at Third Street Elementary School in Arkansas. A major satirical point of the show is that the community of students at school is a microcosm of traditional human society complete with its own government, class system, and set of unwritten laws. They are ruled by a monarch, a sixth grader named King Bob, who has various enforcers to make sure his decrees are carried out. The society has a long list of rigid values and social norms that imposes a high expectation of conformity upon all the students.

Recess is illustrated to be a symbol of freedom—a time when children can express themselves and develop meaningful relationships. Most episodes involve one or more of the main six characters seeking a rational balance between individuality and social order. They are often defending their freedom against perceived threats by adults and school administration or social norms. The group's leader, T.J. Detweiler, tends to have the most complete vision of this struggle, though even he has times when he inadvertently leads the group too far toward an extreme of conformity or non-conformity, and needs to be drawn back to even ground by his loyal friends.

This interpretation is confirmed by the Cold War motifs found throughout the show. For example, Miss Grotke's eccentric and activist attitudes (attributed to her belonging to the counterculture of the 1960s), is juxtaposed with the strict and conservative attitudes of her colleagues such as Miss Finster and Principal Prickly. The presence of government officials either confiscating objects for national security (Episode 37, "The Substitute") or removing persons for thwarting authority (Episode 71, "The Spy Who Came in from the Playground"), serve as subtle reminders on the authority of the US government. Several references by the show's characters convey the fraught political realities of the Cold War period. In Episode 85, “Here Comes Mr. Perfect,” Randall suggests blackmailing a student for being a supposed Communist, while in Episode 37, “The Substitute,” Mr. E demands a student write an essay on why it's wrong to bully people, "unless it’s in the geopolitical interests of the United States.” Cold War themes are most seen in Episode 101, “The Secret Life of Grotke,” where Miss Grotke is suspected by the Recess gang as an anti-American spy due to her mysterious after-school life, as well as Episode 118, "The Army Navy Game," where T.J. masquerades as a Soviet spy to bring Gus and Theresa's military fathers to reconcile.

The show's introductory music, art design and style often evoked the feel of prison escape movies such as The Great Escape, and the playground hierarchy and school administration were often depicted in ways that paid homage to common themes in such films. Additionally, many episodes parody classic films such as Cool Hand Luke, The Good, the Bad and the Ugly, and On Her Majesty's Secret Service. 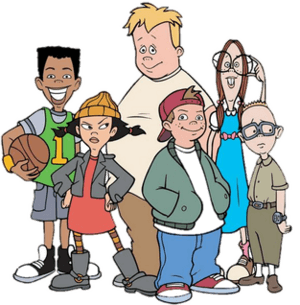 The main characters of the series. From left to right: Vince, Spinelli, Mikey, T.J., Gretchen, and Gus.

Recess first premiered on ABC on August 31, 1997, as a "sneak preview", and later transitioned to ABC's Disney's One Saturday Morning programming block on September 13, 1997. The series' success spawned three direct-to-video titles Recess Trilogy: Recess Christmas: Miracle on Third Street in 2001, Recess: Taking the Fifth Grade and Recess: All Growed Down in 2003; and one theatrical film, Recess: School's Out, which was released on February 16, 2001. The series ended on November 5, 2001; reruns continued to air on UPN until 2003 and ABC until 2004.

Disney Channel added Recess to their lineup on September 3, 2003. Fillmore!, The Legend of Tarzan, and Buzz Lightyear of Star Command were all pre-empted in favor of a 90-minute showing of the series. It temporarily ceased airing on September 2, 2005, but resumed on August 26, 2008 replacing The Buzz on Maggie, and continued until June 30, 2010.

Disaster strikes when Dr. Hämsterviel and his henchman, Gantu, try to use an escaped alien experiment to make everyone relaxed while he takes over the world. Luckily, Gretchen saves the day, since she believes work is relaxing.

Recess: School's Out is an animated film directed by Chuck Sheetz and is based on the television series where the characters must intercept a gang of anti-recess terrorists plotting to bring about a new ice age to eliminate the institution of summer vacation. The film was produced by Walt Disney Pictures and was released theatrically nationwide on February 16, 2001.

Recess Christmas: Miracle on Third Street is a second direct-to-video animated film released by Walt Disney Pictures and Paul & Joe Productions, produced by Walt Disney Television Animation, Plus One Animation (Korea) Co., Ltd. and Grimsaem Animation, Korea Co., Ltd., released to VHS on November 6, 2001. It is a direct-to-video compilation of four unrelated episodes: "Principal for a Day", "The Great Can Drive", "Weekend at Muriel’s", and the series' Christmas special "Yes, Mikey, Santa Does Shave", told as flashbacks by the school faculty members while stuck in a snowstorm. The video includes the voice talents of Dick Clark, Robert Goulet and James Earl Jones as well as many of the series regulars.

Recess: All Growed Down

Recess: Taking the Fifth Grade is a Disney direct-to-video animated film released on December 9, 2003. It is a compilation of "No More School", "Grade Five Club", and "A Recess Halloween", three new stories that involve the main characters in fifth grade.

All content from Kiddle encyclopedia articles (including the article images and facts) can be freely used under Attribution-ShareAlike license, unless stated otherwise. Cite this article:
Recess (TV series) Facts for Kids. Kiddle Encyclopedia.