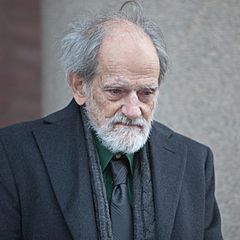 Lloyd Shapley in Stockholm in 2012

Lloyd Stowell Shapley (June 2, 1923 – March 12, 2016) was an American mathematician and economist. He was known for his work on mathematical economics and especially game theory. Since the work of von Neumann and Morgenstern in 1940s, Shapley has been thought by many experts as the very creator of game theory.

With Alvin E. Roth, Shapley won the 2012 Nobel Prize in Economics "for the theory of stable allocations and the practice of market design". In recent years, he worked at the University of California, Los Angeles.

Shapley was born in Cambridge, Massachusetts. He studied at Princeton University and at Harvard University. Shapley died on March 12, 2016 in Tucson, Arizona from complications of a broken hip. He was aged 92.

All content from Kiddle encyclopedia articles (including the article images and facts) can be freely used under Attribution-ShareAlike license, unless stated otherwise. Cite this article:
Lloyd Shapley Facts for Kids. Kiddle Encyclopedia.