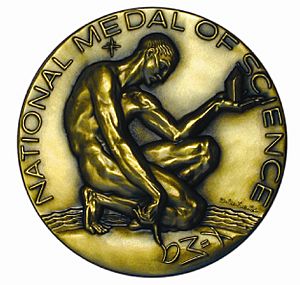 Schwinger was awarded the U.S. National Medal of Science in 1964

Julian Seymour Schwinger (February 12, 1918 – July 16, 1994) was a Nobel Prize winning American theoretical physicist. He is best known for his work on the theory of quantum electrodynamics (QED). Schwinger was a physics professor at several universities. Schwinger is recognized as one of the greatest physicists of the twentieth century, responsible for much of modern quantum field theory.

Julian Seymour Schwinger was born in New York City, to Jewish parents. Schwinger attended the Townsend Harris High School and then the City College of New York as an undergraduate before transferring to Columbia University, where he received his B.A. in 1936 and his Ph.D. in 1939 at the age of 21. He worked at the University of California, Berkeley (under J. Robert Oppenheimer), and was later appointed to a position at Purdue University.

After having worked with Oppenheimer, Schwinger's first regular academic appointment was at Purdue University in 1941. While on leave from Purdue, he worked at the Radiation Laboratory at MIT instead of at the Los Alamos National Laboratory during World War II. He provided theoretical support for the development of radar.

After the war, Schwinger left Purdue for Harvard University, where he taught from 1945 to 1974. In 1966 he became the Eugene Higgins professor of physics at Harvard. Schwinger is known as one of the most prolific graduate advisers in physics. Four of his students won Nobel prizes: Roy Glauber, Benjamin Roy Mottelson, Sheldon Glashow and Walter Kohn (in chemistry).

Schwinger was jointly awarded the Nobel Prize in Physics in 1965 for his work on quantum electrodynamics (QED). Schwinger's awards and honors were numerous even before his Nobel win. They include the first Albert Einstein Award (1951), the U.S. National Medal of Science (1964), honorary D.Sc. degrees from Purdue University (1961) and Harvard University (1962), and the Nature of Light Award of the U.S. National Academy of Sciences (1949).

Schwinger died of pancreatic cancer. He is buried at Mount Auburn Cemetery the symbols engraved above his name on his tombstone refer to his calculation of the correction ("anomalous") to the magnetic moment of the electron.

All content from Kiddle encyclopedia articles (including the article images and facts) can be freely used under Attribution-ShareAlike license, unless stated otherwise. Cite this article:
Julian Schwinger Facts for Kids. Kiddle Encyclopedia.