Abigail Lynn Dahlkemper (born May 13, 1993) is an American professional soccer player who plays as a defender for Manchester City of the FA Women's Super League (WSL), as well as the United States women's national soccer team.

Dahlkemper was born in Lancaster, Pennsylvania and raised in Menlo Park, California. She has two brothers, Andrew (the oldest) and Joseph (the youngest) and is the daughter of Andrew and Susan Dahlkemper. She attended Sacred Heart Preparatory and played on the soccer team. In 2010, she was named Gatorade California Girls Soccer Player of the Year and a Parade All-American.

In 2013 she helped the Bruins win their first ever NCAA National Championship. In 2014, Dahlkemper was awarded the Honda Sports Award.

In 2013, Dahlkemper signed with the Pali Blues in the W-League. The team won the western conference title as well as the national championship in July 2013.

In January 2015, Dahlkemper was selected by the Western New York Flash in the 2015 NWSL College Draft as the third overall pick. She was signed to the team in March and made her debut in April. Dahlkemper won the NWSL Championship with the Flash in 2016.

In October 2015, Dahlkemper joined Adelaide United in the Australian W-League on loan for the 2015–16 season.

In 2018 Dahlkemper played 19 regular season games for North Carolina. She was an important part of North Carolina's defense which broke the record for fewest goals conceded and repeated as NWSL Shield winners. She was named to the 2018 NWSL Best XI and was a finalist for Defender of the year. North Carolina won the 2018 NWSL Championship with a 3–0 win over Portland, and didn't concede any goals in the playoffs.

On January 16, 2021, Dahlkemper joined Manchester City of the English FA WSL on a two and a half year deal, becoming the third American international to sign for the club during the 2020–21 season following Sam Mewis and Rose Lavelle's arrivals in summer. 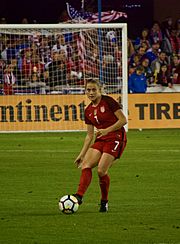 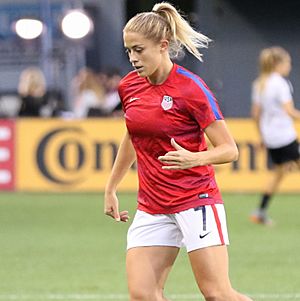 Dahlkemper with the USWNT in September 2017.

Dahlkemper received her first call-up to the U.S. Women's National Team in October 2016 for a set of friendlies against Switzerland. On October 19 she earned her first cap, as she came in as a second-half substitute. Due to a sepsis infection contracted at the end of 2016, Dahlkemper was unable to appear for the U.S. WNT until June 2017.

Following her recovery from sepsis, Dahlkemper quickly became a mainstay for the United States in central defense. She played her first 90 for the U.S. WNT against Norway on June 11, 2017. Dahlkemper would start 10 of the final 11 games of the year, accumulating 945 minutes in 2017, which was fifth highest on the team.

In 2018 Dahlkemper won the SheBelieves Cup and the Tournament of Nations with the U.S. WNT. On September 19, she was named to the final 20 player roster for the 2018 CONCACAF Women's Championship.

In 2019, along with USWNT teammates Crystal Dunn, Megan Rapinoe, and Alex Morgan, Dahlkemper posed for the 2019 Sports Illustrated swimsuit issue in Saint Lucia. She is married to Aaron Schoenfeld. They started dating in May 2019. They announced their engagement in December 2020. Shortly after, they got married in a private ceremony on January 5, 2021.

All content from Kiddle encyclopedia articles (including the article images and facts) can be freely used under Attribution-ShareAlike license, unless stated otherwise. Cite this article:
Abby Dahlkemper Facts for Kids. Kiddle Encyclopedia.