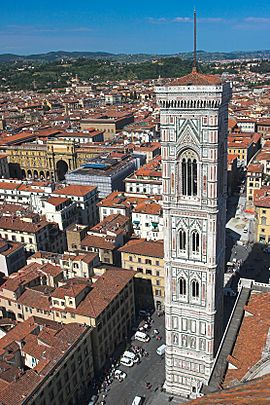 Giotto "Campanile" of the Florence Cathedral, started during the Trecento

The Trecento is considered the beginning of the Italian Renaissance cultural movement. It is sometimes called Proto-Renaissance.

One of the most important centres of art and architecture in this period is Florence, a political, economical and cultural pole of Italy.

The most important artists who represent this period are Giotto, in painting, and Donatello, in sculpture. Indeed the Trecento begins with the works of the painter Giotto and includes Taddeo Gaddi, Orcagna, Altichiero and the sculptor Nicola Pisano.

In 1334 Giotto was appointed chief architect to Florence Cathedral, of which the "Campanile" (founded by him on 18 July 1334 AD) bears his name, but was not completed to his design. Most of the famous Florence Cathedral, an architecture masterpiece, was built during the Trecento.

The Trecento was also famous as a time of heightened literary activity, with writers working in the vernacular instead of Latin. Dante, Petrarch and Boccaccio were the leading writers of the age. Dante produced his famous La Divina commedia (The Divine Comedy), a summation of the medieval worldview, and Petrarch wrote verse in a lyrical style influenced by the Provençal poetry of the troubadours.

All content from Kiddle encyclopedia articles (including the article images and facts) can be freely used under Attribution-ShareAlike license, unless stated otherwise. Cite this article:
Trecento Facts for Kids. Kiddle Encyclopedia.