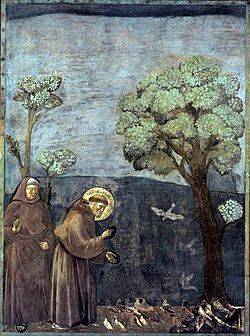 Masterpiece of the Duecento by Giotto: St. Francis' Sermon to the Birds

Duecento is the name of the 13th century in the Italian language. It is related to the culture of the Pre-Renaissance in Italy.

The Duecento is considered the century before the beginning of the Italian Renaissance cultural movement in the Trecento. It is sometimes called Early Proto-Renaissance.

One of the most important centres of art and architecture in this period is Florence, a political, economical and cultural pole of Italy. Other important cities were Pisa, Siena, Arezzo, Mantua and Perugia, all of them in the area of Tuscany.

The main personalities in this century were: Dante Alighieri (considered the "father" of the Italian language); Guittone d'Arezzo; Cimabue; Giotto di Bondone; Guido da Siena; Nicola Pisano; Arnolfo di Cambio and others. Giotto, who was an Italian painter and architect from Florence, is generally thought of as the first in a line of great artists of the Italian Renaissance that stretched until Leonardo da Vinci and Michelangelo.

During the Duecento the religious figure of Saint Francis of Assisi dominated the Italian souls. His poem Canticle of the Sun is considered a precursor of Renaissance poetry

All content from Kiddle encyclopedia articles (including the article images and facts) can be freely used under Attribution-ShareAlike license, unless stated otherwise. Cite this article:
Duecento Facts for Kids. Kiddle Encyclopedia.