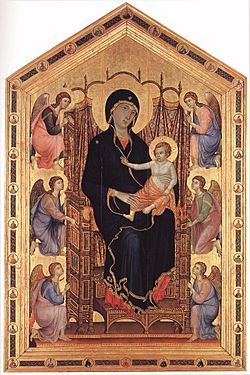 Duccio di Buoninsegna, (c.1255 - c.1319) was one of the most important painters in Italy in the Late Middle Ages. He worked mainly in the city of Siena in Tuscany but one of his largest works was done for a church in Florence. He is most famous for his altarpieces of the Madonna and Child. Duccio painted in the Byzantine style, similar to Greek icons.

The first written record of Duccio is dated 1278, when he was painting in Siena. His paintings, of which only a few remain, are all Holy pictures. Two of them are very large and were painted as altarpieces. Some of them are very small and were for private owners, not for churches.

At that time, many artists painted pictures that were specially for people to look at while they were praying. The pictures are most often of the Madonna and Child. They often have gold backgrounds which glow when they are lit by candlelight. The figures in the paintings do not look very solid or realistic. They look very still, calm and holy. These paintings had been done in the same style for many hundreds of years, in Greece, Constantinople and many other countries where the Greek Orthodox Church was the main church. The style, which was called the Byzantine style, had also spread to Italy where several Orthodox icons (Holy picture), had become famous and were copied by many artists.

Duccio was one of the greatest painters in the Byzantine style in Italy at the time. He had a famous rival who worked in Florence. His name was Cimabue. One of Cimabue's pupils, Giotto, was to become even more famous, and is remembered as having begun the Renaissance style of painting in Florence. Even though Duccio probably saw Giotto's paintings, in which the figures look solid and three-dimensional, like actors on a stage, Duccio was not very influenced by him.

Duccio had several students who also became famous painters of the 1300s. They include Simone Martini and the Lorenzetti brothers, who were also influenced by Giotto.

In 1285 Duccio was asked to go to Florence to paint an altarpiece of the Madonna and Child for the church of Santa Maria Novella which had been rebuilt for the Dominican friars. It was a very large church and for it, Duccio painted the biggest ancient altarpiece of this type that is known. It is called the "Rucellai Madonna" because the Rucellai, who were a very rich family, paid for the decoration of the main chapel of the church, where this altarpiece was hung in the 1600s.

Duccio painted the Madonna sitting on a throne with the Christ Child in her lap, raising his hand in blessing. Around them are six kneeling angels in robes of delicate colours. The robe of the Madonna is very dark blue and looks almost black; it is painted with ground-up semi precious stone called lapis lazuli. The robe of the baby looks quite transparent. Duccio was one of the first painters to try to paint transparent material. One of the important parts of Duccio's design is the gold border of the Madonnna's robe, which seems to wander around the painting in a waving line, and frames the Madonna's face in a way that holds the attention of the viewer.

The "Rucellai Madonna" is no longer in the Church of Santa Maria Novella. In 1948 it was moved to the Ufizzi Gallery where it is shown in the same room as Cimabue's "Trinita Madonna" and Giotto's "Ognisanti Madonna". 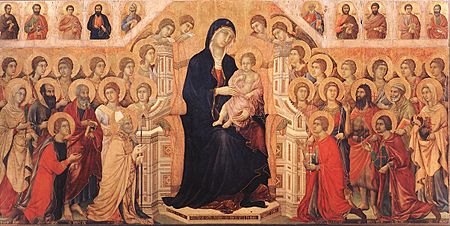 In Duccio's own city there was a large cathedral. In 1308 he was given the job of making an enormous altarpiece of the Madonna on a throne for the cathedral. It was not to be as tall as the "Rucellai Madonna" but was much wider, because it showed two rows of saints and a row of angels on either side of the throne. The four saints the kneel at the front of the picture are those who were particularly remembered in the city of Siena. The altarpiece was to have a very fancy Gothic gold frame with more figures at the top, and small pictures at the bottom, but unfortunately the frame has been destroyed.

Because the painting stood above an altar that was right in the middle of the cathedral, and not against a wall, it was easy for people to walk around to see the back of the altarpiece. So Duccio painted the back as well. The back of the altarpiece had lots of small scenes which tell the life of Jesus. These small scenes, which have gold backgrounds and bright colours in the usual way, are very lively illustrations to the Bible stories.

After three years, the altarpiece was finished. It was carried in a great procession from Duccio's workshop, up the hill to the cathedral which stood on the highest point of the city. It was called the "Maestà" (or "Majesty"). Four other artists were asked to do smaller altarpieces to go in the four chapels that were nearby.

Unfortunately, in the 1700s, people at the cathedral thought that Duccio's altarpiece was old-fashioned. It was taken to pieces, and some of the smaller parts were sold. They can be seen in the National Gallery, London and other places. Luckily most of the pieces were kept together and can now be seen in the Cathedral Museum which is near Siena Cathedral.

Some of the smaller panels from the "Maestà"

Some of Duccio's other works

All content from Kiddle encyclopedia articles (including the article images and facts) can be freely used under Attribution-ShareAlike license, unless stated otherwise. Cite this article:
Duccio Facts for Kids. Kiddle Encyclopedia.