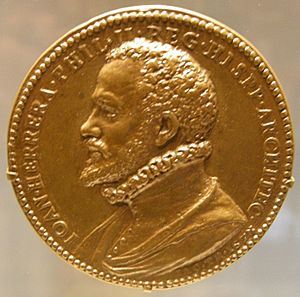 His architectural style, called herreriano in his honour, was representative of the reign of Philip II of Spain (r. 1556-1598) and was a notable influence on 17th century Spanish architecture.

All content from Kiddle encyclopedia articles (including the article images and facts) can be freely used under Attribution-ShareAlike license, unless stated otherwise. Cite this article:
Juan de Herrera Facts for Kids. Kiddle Encyclopedia.