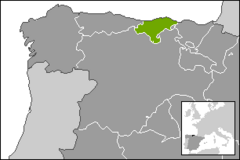 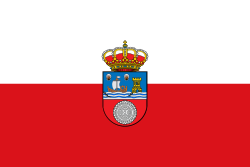 Cantabria is a region in the north of Spain. It has 563,000 people living in it. In Cantabria most people speak Spanish. The people of Cantabria have autonomy in Spain, which means they have their own local government and much control over their region. The capital is Santander. This city is on the coast of the Cantabrian Sea and is very popular with tourists. Cantabria belongs to the Green Spain, the name given to the strip of land between the Cantabrian Sea and the Cantabrian Mountains in northern Spain.

Many different examples of prehistoric cave art have been found, suggesting the Cantabrian culture is at least 15,000 years old. Cave art is the best known feature of the Cantabrian life. The latest round of systematic cave explorations began in the early 1970s. Now new art can be discovered every year. Some of the cave art is engraved, and others are painted. Much of the cave art is of animals. There are often pictures of red deer found from this area of Spain. There are also other unusual symbols that can be found. This attracts much interest and many tourists to this culture. The Cantabrian life revolves mainly around art, tourism, and fishing. Rich deposits of coal, iron, and zinc are also mined in the Cantabrian Mountains. Tourism is a very large part of the Cantabrian life, and their economic success.

Cantabria is known for a rainy and cool climate. The region is also greener than southern Spain and is very mountainous.

All content from Kiddle encyclopedia articles (including the article images and facts) can be freely used under Attribution-ShareAlike license, unless stated otherwise. Cite this article:
Cantabria Facts for Kids. Kiddle Encyclopedia.