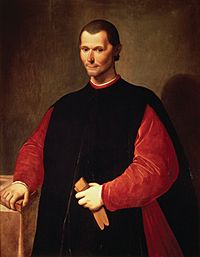 A portrait of Macchiavelli, by Santi di Tito

He was a diplomat, political philosopher, playwright, and a civil servant of the Florentine Republic. He also wrote comedies, carnival songs, poetry, and some of the best-known personal correspondence in the Italian language.

Machiavelli is known today as the author of The Prince. This book has influenced politics. 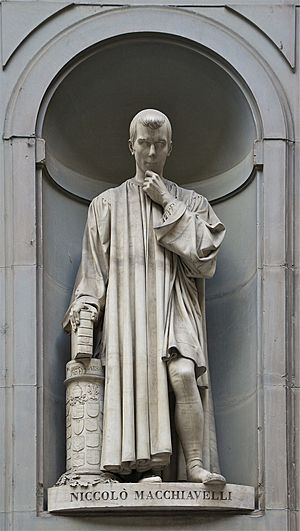 A Statue of Niccolò Machiavelli, located at the Uffizi

In his best known book, The Prince, he describes the way that a Prince (by which Machiavelli means a ruler) can control the people he rules. He looks especially at what he calls the "new prince", saying that a prince from a royal family has an easier job because the people are used to his family and the way of life. All that such a hereditary prince needs to do is carefully stick to the traditional ways of working that the people are used to. A new prince has a much more difficult job because he must get people used to his new power and build up new ways of working that people can get used to. This job means that the new prince has to act in a way people would not quickly criticize, but Machiavelli says this may mean doing bad but necessary things which people do not see or remember. Otherwise a new prince will find it difficult to get anything important done, or even to keep ruling.

All content from Kiddle encyclopedia articles (including the article images and facts) can be freely used under Attribution-ShareAlike license, unless stated otherwise. Cite this article:
Niccolò Machiavelli Facts for Kids. Kiddle Encyclopedia.