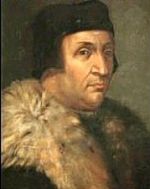 Francesco Guicciardini (March 6, 1483 – May 22, 1540) was an Italian historian and statesman. He is considered one of the major political writers of the Italian Renaissance and the Father of Modern History. He was a friend and critic of Niccolò Machiavelli. 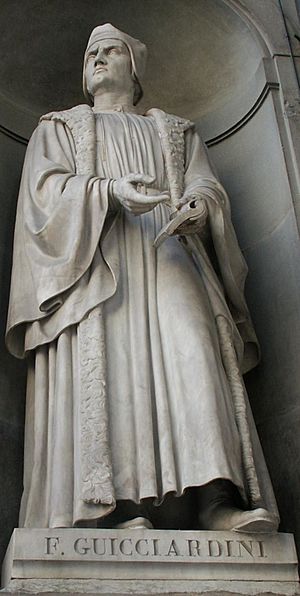 Statue of Guicciardini in the Uffizi, Florence.

His family was illustrious and noble; after the usual education of a boy in grammar and elementary classical studies, his father, Piero, sent him to the universities of Ferrara and Padua, where he stayed until the year 1505. In 1512, he went to the court of the King of Aragon, Ferdinand the Catholic as ambassador.

All content from Kiddle encyclopedia articles (including the article images and facts) can be freely used under Attribution-ShareAlike license, unless stated otherwise. Cite this article:
Francesco Guicciardini Facts for Kids. Kiddle Encyclopedia.