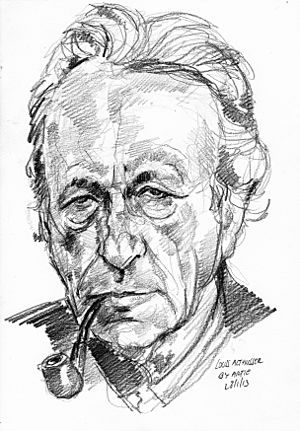 Louis Pierre Althusser (Pronunciation: altuˡseʁ) (October 16, 1918 – October 22, 1990) was a Marxist philosopher. He was born in Algeria and studied at the École Normale Supérieure in Paris. Then, he became Professor of Philosophy there. He also was a teacher of Michel Foucault and Jacques Derrida.

Althusser was a lifelong member of the French Communist Party. Sometimes he criticised the party strongly. His arguments and theses were set against the threats that he saw attacking the theoretical foundations of Marxism. These included both the influence of empiricism on Marxist theory, and humanist and reformist socialist orientations which could be seen as divisions in the European Communist Parties, as well as the problem of the 'cult of personality' and of ideology itself.

Althusser is commonly referred to as a Structural Marxist, although his relationship to other schools of French structuralism is not a simple affiliation and he is critical of many aspects of structuralism.

All content from Kiddle encyclopedia articles (including the article images and facts) can be freely used under Attribution-ShareAlike license, unless stated otherwise. Cite this article:
Louis Althusser Facts for Kids. Kiddle Encyclopedia.