Girolamo Savonarola (21 September 1452 – 23 May 1498), was an Italian Dominican priest and leader of Florence from 1494 until his execution in 1498. Savonarola is famous for burning books, and for the destruction of what he considered immoral art. Savonarola was a priest but he preached against the moral corruption of the clergy and the Church of Rome. His main enemy was Pope Alexander VI. He is sometimes seen as a forerunner of Martin Luther and the Protestant Reformation, however he remained a devout Roman Catholic.

In the twentieth century, a movement for the canonization of "Frà Savonarola" began to develop within the Roman Catholic Church, particularly among Dominicans. Many believe that his excommunication and execution were not legal. However, his beatification and canonization is opposed by many Jesuits, who think Savonarola's attacks on the papacy to have been a serious crime.

Savonarola was born in Ferrara, the which was the capital of the independent Duchy of Ferrara.

In his youth he studied the Bible, and then went to the University of Ferrara. He wrote two poems which showed his anger at morally corrupt clergymen. The first, about the end of the world, was written when he was only 20. Savonarola wrote the second poem "De Ruina Mundi" ("On the Downfall of the World") in 1475. 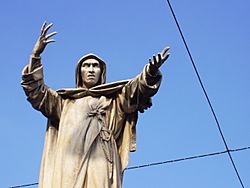 Statue of Savonarola in, Ferrara, Italy.

Savonarola became a Dominican friar in 1475, and entered the convent of San Domenico in Bologna. He studied theology. In 1479 he went to the convent of Santa Maria degli Angeli. In 1482 the Dominicans sent him to Florence, the ‘city of his destiny’. After five years, he went back to Bologna where he became 'master of studies’.

He returned to Florence in 1490 and began to preach about the end of the world. He had visions and prophecies which he said had come to him from God and the saints. Several disasters made his prophecies real. He spoke about the failing power of the ruling Medici family. Savonarola never tried to make war on the Roman Curia. He wanted to put an end to the sins of the popes who cared more about their riches and power than they did about God .

After Charles VIII of France invaded Florence in 1494, the ruling Medici were removed. Savonarola became the new leader of the city, both as a secular leader and priest. He set up a rather modern democratic republic in Florence. Savonarola wanted to make Florence a city devoted to God, a good “Christian and religious Republic.” Homosexuality had been acceptable in Florence, and many were important people. One of Savonarola's first laws was to make this a crime which would be punished by death. 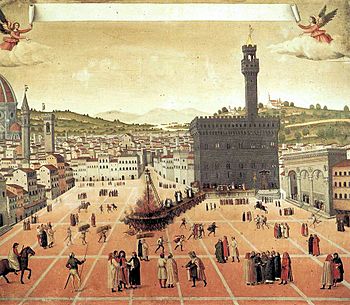 Painting of Savonarola's execution in the Piazza della Signoria.

In 1497, he and his followers went to the Piazza della Signoria, and began to burn mirrors, cosmetics, obscene pictures, pagan books, gaming tables, musical instruments, fine dresses, women’s hats, and the works of immoral and ancient poets. They also burnt paintings by some famous artists, such as Sandro Botticelli and Michelangelo. This event is now called the "Bonfire of the Vanities".

Florence soon became tired of Savonarola. The city had become an unhappy place to live. Savonarola's promises that God would change things in the city did not come true, and his predictions of the end of the world did not happen. During his Ascension Day sermon on May 4, 1497, groups of young men rioted in the streets, people began singing and dancing, and the taverns reopened. The riot became a revolution. 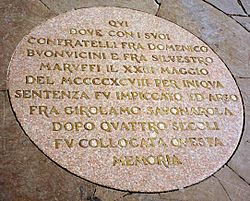 A plaque shows the site of Savonarola’s execution in the Piazza della Signoria, Florence.

On May 13, 1497, Savonarola was excommunicated by Pope Alexander VI. In 1498, Alexander demanded his arrest and execution. On April 8, soldiers attacked the Convent of San Marco and after a bloody battle Savonarola's guards and religious supporters were killed. He surrendered and during the next few weeks was tortured to make him say that he was gulity of heresy, corruption, and other crimes against the Church.

On the day of his execution he was taken out to the Piazza della Signoria with Fra Silvestro and Fra Domenico da Pescia, two religious friends of Savonarola. They were stripped of their clerical clothing, and called heretics and schismatics. The three men were put on crosses,and burned alive. Savonarola died in the same place where he had burnt the paintings and books.

Niccolò Machiavelli, author of The Prince, also saw and wrote about the execution. The Medici soon retook control of Florence.

All content from Kiddle encyclopedia articles (including the article images and facts) can be freely used under Attribution-ShareAlike license, unless stated otherwise. Cite this article:
Girolamo Savonarola Facts for Kids. Kiddle Encyclopedia.